Where Valentine’s Day is Most Popular Around the World 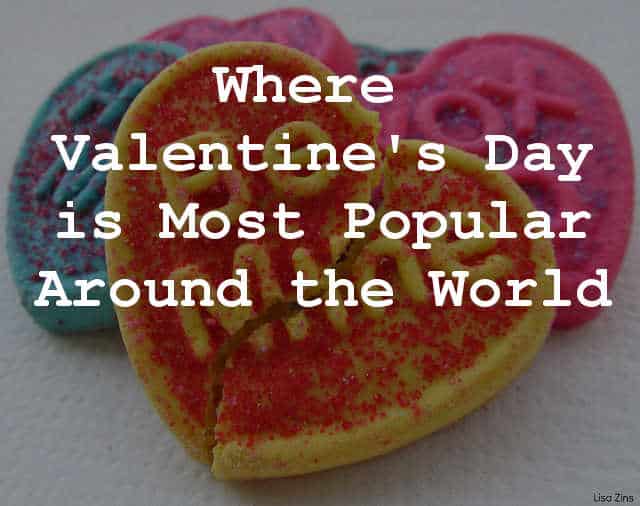 Many believe that Valentine’s Day is a big thing only in America so we turned to Google Trends, a reliable source of big data, to find out if this is actually true.

According to Google Trends data, Valentine’s Day is most popular not in America or the Western world but in the Arab countries, Asia and Latin America.

Let’s take a look at the countries and cities where Valentine’s Day was most popular over the past 12 months.

Who would have thought that Valentine’s Day is so hugely popular in Iran?! And this despite or maybe in spite of Valentine’s Day being banned in the Persian state. According to Newsweek, Iran banned the sale of any goods related to Valentine’s Day in 2011 as it was considered a symbol of decadent Western culture. It seems like this doesn’t stop the Iranian people in continuing to celebrate this amazing holiday.

In Honduras, Valentine’s Day is also known as the Day of Love and Friendship. The great thing about Valentine’s Day in Honduras, and in other Latin American countries, is that it’s much more inclusive than anywhere else. This is a holiday for love and friendship and thus not restricted to those who have a partner.

Valentine’s Day is called Prem Diwas or Pranaya Dwas in Nepali. While Valentine’s Day was not traditionally celebrated in Nepali it has taken off the ground since the 90s. Now it is very popular among the young generation so much so that the country imports hundreds of thousands of roses to satisfy local demand during Valentine’s Day.

Not even war and violence has deterred Iraqis from celebrating Valentine’s Day, which is an extraordinary statement of the power that love has on people. In February, the streets of Bagdad are flooded with red flowers, red balloons and red teddy bears that Iraqis buy as Valentine’s Day gifts for their loved ones.

Who would have thought that Valentine’s Day is so hugely popular in Iran?! And this despite or maybe in spite of Valentine’s Day being banned in the Persian state. According to Newsweek, Iran banned the sale of any goods related to Valentine’s Day in 2011 as it was considered a symbol of decadent Western culture. It seems like this doesn’t stop the Iranian people in continuing to celebrate this amazing holiday.

While technically not a US State, it’s no secret where Puerto Ricans got their love for Valentine’s Day. Called El Dia de San Valentin, the holiday is celebrated by holding large parties and large family gatherings.

The home of the love cake is one that loves to throw a big party for the holiday of love. We were not the first to think of this funny association as the Sri Lankan government launched a marketing campaign to promote the love cake and Sri Lankan cuisine during last year’s Valentine’s Day.

As in other Latin America countries, Valentine’s Day in the Dominican Republic is known as the Day of Love and Friendship (El Día del Amor y la amistad). This is not only a celebration of couples, but used as an opportunity to express love and affection for close friends and family. In the Dominican Republic everyone exchanges “cariñitos” – small gifts of love between couples, family and friends.

The Philippines celebrates Valentine’s Day like no one else – with large group weddings. Hundreds, sometimes thousands, get together to say “I do” during a public ceremony.  Apart from Christmas, Valentine’s Day is considered to be one of the biggest and most commercialized holidays in the Philippines.

While not the first surprise in this study, Syria is probably the biggest. Torn by civil war, Syria may seem an unlikely place to celebrate Valentine’s Day. Google data as well as many news reports say otherwise – Syrians love Valentine’s Day in spite of all they had to go through recently.

Panama celebrates Valentine’s Day on February 14th and while it’s popular in this country it is overshadowed by the more popular Mardi Gras festival.

Valentine’s Day is celebrated on February 14th in Bangladesh and while it’s a fairly recent holiday in the country it has gained huge popularity among the young generation. Young couples exchange greetings through mobile SMS and social media, give gifts and flowers and generally come out in a colorful and festive look.

Ecuadorians love Valentine’s Day and it’s a day that synonymous with the beautiful Ecuadorians roses. Restaurants and hotels are packed with lovers spending a romantic dinner together.

Valentine’s Day celebration in the United States needs no introduction. It is extremely popular especially in schools where kids exchange Valentine’s Day cards. Adults also exchange gifts and cards and celebrate the day with their significant others.

Valentine’s Day is called Dia dos Namorados or Lover’s Day in Brazil and it is celebrated on June 12th. While some also celebrate Valentine’s Day on February 14th, most of the country will be absorbed by the Carnival Week, which is one of the biggest events in the country.

Celebrations for Dia dos Namorados are similar to those in the UK and the US: exchanging chocolates, flowers and having a lovely romantic dinner.

Valentine’s Day or El Día de los Enamorados is very popular in Costa Rica. Ten million text messages are sent on this day and these are very similar to piropos or traditionally risqué compliments for women in the Spanish culture. Many ticos go to the beach or to the mountains to get away from their daily routines. At night, many couples usually enjoy a romantic dinner.

Japan celebrates Valentine’s Day in a very unique way as it the women who buy gifts for their partners. Women usually buy chocolates for men on Valentines Day –  “Giri-choco” which is meant for friends, colleagues, bosses, and close male friends and “Honmei-choco” which are given to their significant others.

Newsweek has reported Iran has banned the sale of any goods related to Valentine’s Day in 2011. While commemorating Valentine’s day may be a vice according to the laws of Iran, lovers in Tehran nonetheless rejoice in celebrations on this special day.

According to VOA News, store owners aren’t even afraid to keep an “abundance” of Valentine’s Day related commodities for sale, such as stuffed animals and “chocolate boxes with heart signs”, typical tangible gifts exchanged between western world’s lovers. It seems that love indeed conquers, after all.

The Huffington Post has ran an article titled “7 Kolkata Valentine’s Day Deals That Will Win Your Heart” in 2017, and Anulekha Agaral of The Times of India media outlet has even covered an article titled, “What day? We’re celebrating Valentine’s week!” published just last year in 2018. Agaral reported Neha Gupta Agarwal of Seize The Day, “We have seen the trend more than double since last year”, demonstrating the elated visions Kolkata lovers have for this widely celebrated holiday.

We’ve got no problems for Valentine’s Day, Houston. This Texan city and its residents must elate over the idea of enjoying good food with their significant other on February 14th, because The Houston Press reports on literally the longest list of places couples may enjoy luxuriating in on Valentine’s day.

With local eatery offers such as an authentic & cozy Surf & Turf at ARA Restaurant Axis Lounge or a more formal three-course meal deal at Broken Barrel available, longing lovers can enjoy local eats like they normally do, with V-Day special offers. Couples bit by the wanderlust bug don’t even have to travel for a mini getaway, as they can get away on Valentine’s day with a taste of Greece at Helen Greek Food and Wine. The city of Houston must revel in celebrating the love you have with your significant other (over good food).

Those in Bogota, Columbia celebrate something called “El Dia del Amor y la Amistad”, or the Love and Friendship Day instead of Valentine’s Day, per se, writes Paul Fowler of Colombia Travel Blog.

This is celebrated on “the 3rd weekend of September” and is a day to embrace everyone you know, including friends and loved ones. The distinction in fact demonstrates Colombian culture’s advocacy for inclusivity, making ‘Valentine’s day’ an all-embracing day after all.

In spite of its commercial festivities and billboards telling you to celebrate Valentine’s day, New York City is no doubt the place you’d want to be for Valentine’s day. Taylor Swift’s 2014 song “Welcome to New York” even famously references the city with, “Everybody here wantin’ something more/And you can get who you want/Boys and boys and girls and girls”.

Not only does Swift suggest that New York City is an inclusive, opportunist place for all lovers to rejoice, The Culture Trip has also posted an article titled, “14 Perfect Things to Do for Valentine’s Day in New York City” which details events from the brave “Cupid’s Undie Run” for charity to taking an organic stroll along the Brooklyn Heights Promenade, breathing in the brisk air of February in the city for lovers

Since India’s liberalization, political protests have risen against Valentine’s day being a Westernized cultural celebration. As such, February 14th is a largely celebrated yet wary day for its citizens of India who must face potential protests that could occur from this.

Mumbai has nonetheless become a place to be for unconventional ways of celebrating your love on Valentine’s day. From sailboating on a yacht to taking your beloved on a chopper ride, those in Mumbai have an array of romantic celebrations to choose from when it comes to proclaiming your love out loud on February 14th.

Lovers living in the LA area tend to enjoy the smaller things in life, relishing in moments rather than tangible gift-giving traditions. Los Angeles is the hot spot for a nice gondola ride in Newport or booking a day spa together before having dinner in the evening on Valentine’s day.

Added to the list of yogis, green juice cleanses and array of creatives living in LA, it’s no wonder Valentine’s day is embraced in the simple and organic activities with your loved ones, such as taking a long, romantic stroll in Venice beach.

Unlike the traditions of the Western world, February 14th is the official day for female lovers in Osaka to surprise their male lovers with handmade surprises, according to Matcha Magazine.

However, this is also a day for couples to take a photo and commemorate their love with the famous Love Statue in Nishi-Shinjuku, as you’ve probably already seen tourists and couples taking photos with on Instagram and all across social media. Girls love to take their time in making handmade chocolates and sweets for their lovers, as well.

Another city that promotes quiet adventurous alone time with your loved one(s) is Chicago in the U.S. From viewing burlesque shows to viewing the gorgeous skyline on the Centennial Wheel, ChooseChicago.com‘s list shows there’s no doubt that lovers in Chicago take pride in the experiences available to have a memorable Valentine’s day together. The Chicago Sun Times even lists ghost hunting as part of their list of “wacky” things to do on this special day!