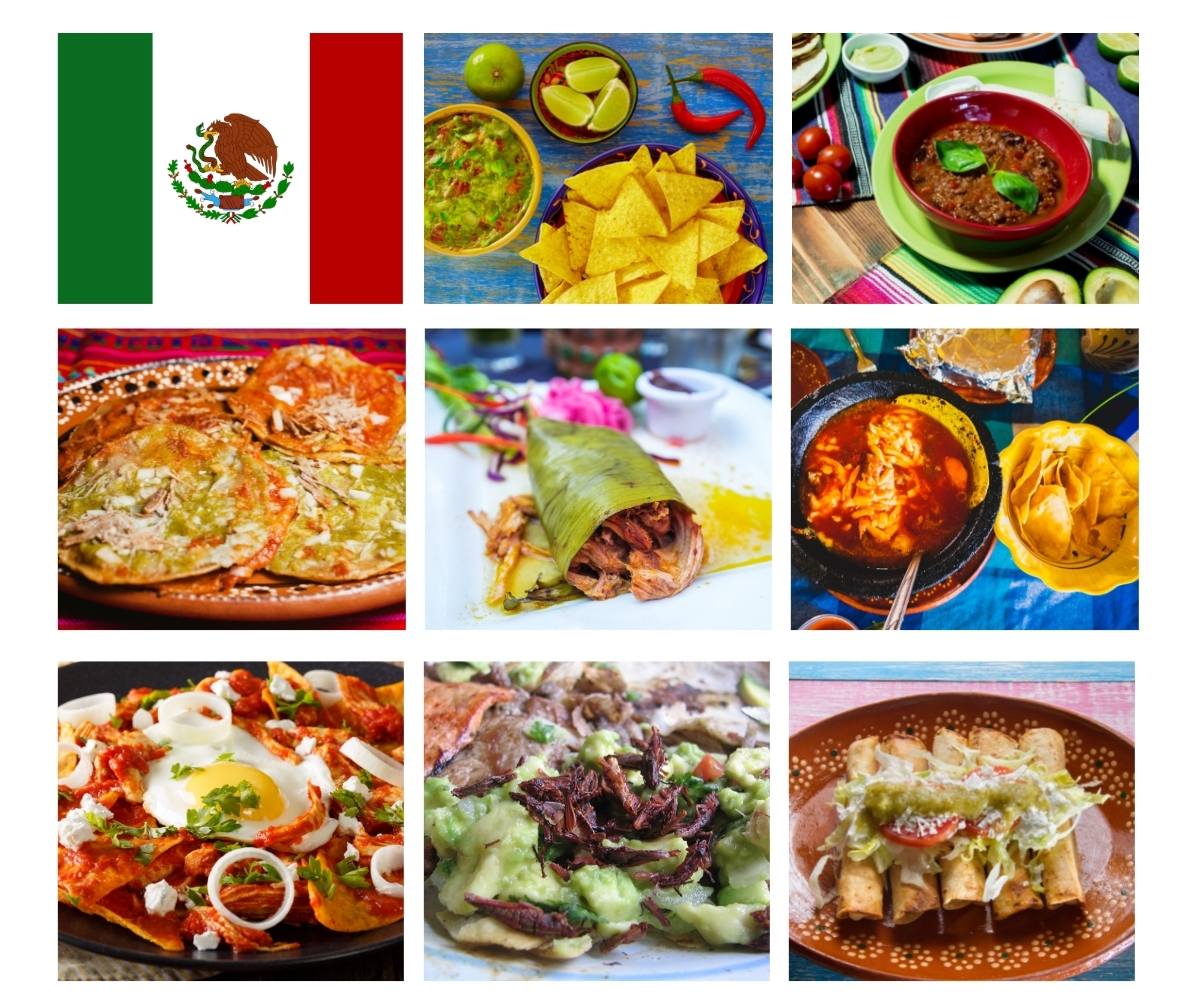 México has one of the richest gastronomies in the world and Mexican food is one of the most beloved cuisines worldwide! It is the product of a set of ancient techniques, that are followed even today, and a sort of mix between pre-Hispanic local products and European ingredients such as certain spices like cinnamon, wheat, cattle, milk, cheese, etc.

Because of its ritual practices, ancient knowledge, culinary techniques, customs and ancestral community cultures, in 2010, Mexican gastronomy was recognized by UNESCO as an Intangible Cultural Heritage.

Mexico is known for its street markets, where you can find all sorts of magical stuff—things you couldn’t even imagine. Every street market has its own food area and is a representation of local cooking. If you ever visit this country, you must not miss out on eating at a street market; if you do, you will definitely regret it!

Here are the top 30 most popular Mexican foods of all time:

Chilaquiles is definitely the most popular breakfast in the country. Made of triangular pieces of fried or toasted corn tortilla, called totopos, soaked in a red or green hot sauce, topped with shredded chicken, chorizo, shredded beef, and scrambled or sunny side up egg. It is decorated with fresh cheese, coriander, and sliced onion and is served with fried beans on the side.

These represent the hats of two ranchmen. It´s made with two fried corn tortillas, topped with fried beans, and two sunny side up eggs all bathed in red hot sauce and decorated with coriander and freshly ground black pepper.

This is one of the most popular dishes on the northern side of México. Machaca is very versatile; you can either eat it in a taco, a stuffed burrito, flautas, or just as a stew with some tortillas, beans, or rice on the side. Machaca is simply a shredded version of dried beef with a proper seasoning. It´s delicious!

Recognized as the most popular Mexican dish worldwide, the taco has become an art. Some say is the “art of eating with tortilla” and, of course, Mexicans would never deny a taco to anybody. Hundreds of fillings can be put on a corn tortilla! The most common are beef steak, flank steak, chorizo, offal, “al pastor”, hot and sweet marinated pork.

Exotic tacos are filled with fried brains, beef´s eyes, liver with onions, scorpions, bull testicles, escamoles, and a whole lot of fillings you could never imagine. Escamoles are ant larvae found only in central and southern México. The larvae are only found once a year and harvesting them is quite a delicate operation, making this a very expensive dish—a bit like caviar.

This is very popular on the northern side of México, especially the states bordering the United States. A burrito is a cylindrically rolled flour tortilla stuffed with different ingredients of choice, often a stew. The most popular are the fried bean burrito with cheese and the machaca burrito.

There is a myth in Mexican culture that before the conquest, Pozole was made out of human flesh. In reality, it is a dish made with the meat of a Xoloitzcuintle (a dog endemic to the country).

Nowadays, though, Pozole is cooked with shredded chicken or wild turkey. There are several types, such as green, red, or white pozole, camagua, sea food, elopozole, etc. The most popular are the green and red.

History tells us this came from Spain decades before the conquest. They used pieces of tripe, according to The Art Book of Cozine, by Diego Granado.

Nowadays, menudo is a seasoned soup made with corn kernels, with or without the grains, and beef tripe. It is often also known as Pancita.

A southern delight, Cochinita Pibil is a slow cooked shredded pork stew, typical of the Yucatan Peninsula. The meat is marinated in achiote, orange juice, onion, and vinegar, then cooked wrapped in banana leaves. It is served with marinated onion and fresh habanero. You can try it in tacos, burritos, tortillas… etc.

Tamales are an icon of Mexican food. You can eat these all day every day, especially on the Day of The Candelaria. It comes from pre-Hispanic America, and is náhuatl in the indigenous language, meaning wrapped. These can be wrapped in corn leaves or banana leaves and stuffed with any stew of your choice. The most common are mole, shredded chicken or pork with green or red salsa, pepper with cheese, and yellow corn kernels.

Quesadilla (Cheese-adilla) are corn or flour tortilla folded in half, stuffed with cheese or other ingredients, deep fried or grilled and eaten hot.

The picture shows a blue corn quesadilla, filled with Cochinita Pibil and, of course, cheese.

Pork beans are very popular. They are a mixture of beans cooked with lard, chorizo, bacon, cheese, serrano peppers and some other secret ingredients, making this a delicious dish.

This is fast food made from corn tortilla dipped in hot sauce, filled with various stews, vegetables or proteins, depending on the style.

Enchilada is en-chili-ada—so always expect a tasty spicy touch. They are served with sour cream, fresh cheese, onion, and celery.

This dish comes from a very old tradition. It is made with a full Poblano pepper stuffed with picadillo (a mixture of grounded meat, fruits, and spices), topped with a walnut-based cream sauce, and decorated with pomegranate seeds and celery. From the city of Puebla, the colors resemble the Mexican flag.

Esquites are a delicious street food and come in many different varieties depending on where you are in the country. Northern states put cream, mayonnaise, chili powder, lemon, butter, and cheese on it. Here, you can either eat it in a cup or with the whole corn pierced on a stick. The central-southern states prefer them with cream and cheese or with lemon chili powder, but not a mix. Some people cook them with epazote and bone marrow. Extremely delicious!

Mexican popped amaranth hard candy comes as a bar with various toppings, for example, dried fruit, chocolate, raisins, nuts, etc. This candy is made from amaranth seeds mixed with honey. It is originally from México City, and, since the 16th century, it has been known by the name Alegría, which means joy.

Mole is a sauce made from a mixture of dried chilies, tomatoes, chocolate, seeds, and spices. It is one of México´s most representative dishes. There are several versions of its origin. One of them says that Poblano Mole, whose original recipe involved about 100 ingredients, emerged in the Convent of Santa Rosa in the city of Puebla, when a nun ground in a metate different chilies and seasonings.

Another version says that Archbishop Juan de Palafox from Spain came to visit Puebla. One of the cooks got so nervous that he stumbled into the casserole where guajolotes (wild turkeys) were cooking and chilies, almonds, chocolate, and other spices fell in.

In México, there are seven different types of mole; you should try each one.

Pipián stew originated in pre-Hispanic times and was one of Emperor Moctezuma´s favorite foods. Coming from the central-southern states, it is obligatory on any sauce menu. The sauce is made from toasted and ground pumpkin seeds and usually poultry, although it is sometimes accompanied by pork, beef, or rabbit.

This is a typical dish of the western coast region of México, particularly the state of Sinaloa. It is said that pre-Hispanic cultures used to mix dry meat with water and chilies (chiltepín chili). In 1970, they replaced meat with raw shrimp and added other ingredients: lime juice, cucumber, coriander, red onion, avocado, salt, and pepper.

This is a very popular dish from the Mexican coasts and it’s a pre-Hispanic delight. Zarandear is a term that means moving or shaking a lot. The meat was originally roasted on a mangrove wood grill called Zaranda, but now a metal grill is used. It is prepared by seasoning the fish with lemon and chili sauce, then smoking it with mangrove wood.

One of the most ingrained traditions in Mexico is Lent, when seafood is usually eaten instead of meat. Camarones a la Diabla is an iconic dish during the season. It is cooked with a combination of chilies—guajillo, chipotle and arbol—which makes it extremely spicy.

From the State of Jalisco, this dish is seasoned with a preparation based on some varieties of chili, seasonings, and salt. A tomato-based sauce is prepared with the juices from the cooking, called consomé. Birria was originally made with goat, but lamb, mutton, pork, chicken, veal, beef, or fish can also be used.

Some birrias are cooked over the heat in covered pots, with the lid sometimes sealed with corn dough. Baked birrias are called tatemadas.

Originally, the meat was wrapped in maguey pencas and cooked, but this tradition has almost disappeared.

This is the most famous dish in the State of Oaxaca, southern México. It is a large corn tortilla (about 30 cm in diameter) made of white corn. It is first put on the griddle and then placed on the embers to get it dry and crispy.

A traditional tlayuda consists of lard, black beans, tasajo (dried pork meat), chorizo, and cheese and is accompanied by water chili, sliced tomato, avocado, and, of course, you can´t leave out the mezcal with worm salt!

You can find this in the state of Oaxaca and México City. It is the perfect combination of creamy avocado and crispy, acidic grasshopper. They are delicious and very nutritious as they have a high protein content.

Marinated with salt and garlic, then sautéed on the griddle until they turn reddish and crispy, they are a surprising treat.

The flutes are traditional Mexican tacos made with rolled corn tortilla and filled with mashed potato, cheese, chicken, etc. The difference is that they´re fried in oil. They´re usually served with coriander, tomato, fresh cheese, and sour cream on top.

This is the most popular street food in the state of Jalisco. It’s a sandwich made with a bread called birote stuffed with confit pork meat immersed in a hot sauce based on dried chilies, vinegar, tomato, and spices. They are simple, spicy and tasty! The original torta ahogada is eaten out of a plastic bag.

This is different parts of pork fried in lard, cooked in huge copper pots for hours. The secret tasty flavor comes from the various ingredients used in the cooking process, one of them being orange juice or soda!

You can eat it in a taco or a sandwich.

Here´s a great classic of Mexican cuisine, made with strips of fried tortillas topped with chicken broth, tomato, pepper, garlic, and onion, scented with epazote and coriander, and topped with cheese, avocado, and sour cream.

In Tlaxcala city, Aztec soup was born as a hybrid, combining Mexican corn tortilla with the Spanish tradition of soup making.

This is a fluffy dessert served outside churches as an after-mass treat, especially on Sundays. They are made from wheat flour, cream, sugar, and cinnamon and can be eaten plain or filled.

Born in the state of Chihuahua, Mexico in 1989, Griselda is a Chef and writer. She has a degree in gastronomy from the ECI University of Gastronomy, Guadalajara, and she is a passionate cook.