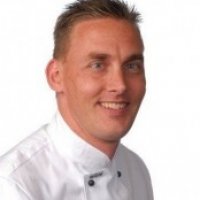 All posts by Bas Van Uyen

Born in Holland in 1974 into a wholesome food loving family Bas migrated to Australia in 1981. Completing his apprenticeship in Commercial Cookery in 1992, Bas has worked at some of Melbourne’s finest five star Hotels and Restaurants. During this time he has won various awards including a gold medal in the Australasian Salon Culinaire.

Bas is currently an industry advisor to major Hospitality training institutions in Melbourne and has held a position on the Restaurant Catering Victoria Board for a number of years. His role with Sodexo will include developing and implementing menu offers for all sectors including the aged care and seniors offer, training and developing staff and ensuring compliance with food safety programs and HACCP.

Share
I first introduced the recipe at a restaurant called Wharf 8, Melbourne Victoria. It was a hit, simple, fresh and unadulterated. We soon started to experiment curing different cuts of...

Like 1
Read More
Comment
Share
Uncategorized
Who can’t resist this as a dessert or afternoon tea? The stickiness from the meringue and the zesty lemon hit from the filling. Notes: You will need baking paper for...

Like 0
Read More
Comment
Share
In my opinion seafood is best left unadulterated. We are very fortunate that we have access to some of the world’s finest seafood in Australia. From our farmed Salmon in...

Like 0
Read More
Comment
Share
Uncategorized
I love nothing more than a home made meal based on comfort food. Chicken Cordon Bleu comes to mind as one of those items. It takes me back to the...

Like 1
Read More
Comment
Share
Uncategorized
This dish was inspired by my mother in law who makes the best apple slice. She is a pastry chef and stopped working in the trade a few years ago...

Like 0
Read More
Comment
Share
Preheat oven to 110 degrees Celsius/ 220 Fahrenheit Place a sheet of baking paper onto a flat baking tray and spray with non stick spray. Place egg whites in a...

Like 0
Read More
Comment
Share
This is a Sunday afternoon indulgence. Wonderful fresh asparagus blanched and then marinated in white truffle oil and Balsamic. Very simple but amazing flavour. Great with some sour dough and...