Top Most Popular Countries and Cities for Vegans in 2020 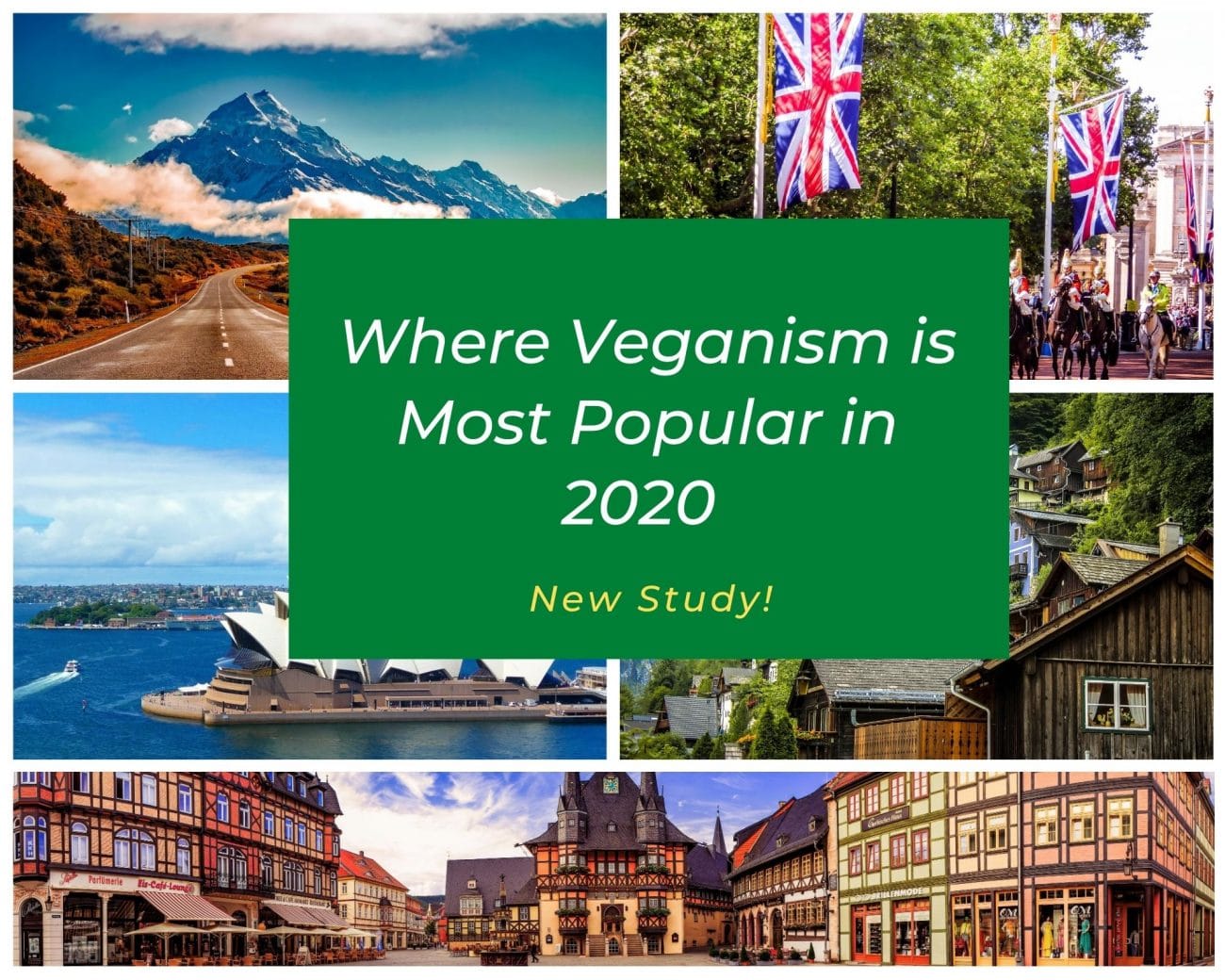 A year to forget – that’s what 2020 has been so far for so many people, as well as hordes of companies and industries, but not for the veganism movement. Veganism is having a blast – its popularity and adoption continuing to surge at record highs.

Veganism is having a blast – its popularity and adoption continuing to surge at record highs.

We turned again to Google Trends, a reliable source of big data, to analyze the popularity of veganism worldwide and find out how it has been impacted by the pandemic.

Google Trends lets you analyze the popularity of various search categories around the world such as veganism, which comprises vegan-related searches made in any language (e.g. “veganism”, “vegan restaurants near me”, “vegane rezepte”, “vegan essen”).

While people make some of these searches out of curiosity, a high volume of vegan-related searches, such as vegan recipes or vegan restaurants near me, show a clear intent to eat vegan.

Data from Google Trends show that the popularity of veganism is at an all-time high, surpassing the prior all-time high registered in 2019. To put things into perspective, veganism is now twice as popular as it was just five years ago, and it doesn’t show any sign of slowing down.

The pandemic has not stopped the rise of veganism but has actually added a bit of fuel to its popularity. Searches for vegan recipes have soared and are still going very strong, although lockdown has ended in most parts of the world. Restaurants have been hit badly, but according to HappyCow, more vegan restaurants have opened than closed during the pandemic. And ImpossibleFoods, one of the top producers of plant-based dishes, has announced record sales.

Veganism is stronger than ever, as you can see by the number of countries whose cuisine traditionally is greatly meat- and dairy-based seeing a big rise in veganism. So let’s take a look at where veganism is most popular in 2020. Drum roll please.

Helped by Veganuary and expansive media coverage, veganism popularity has exploded in the UK. It’s now the third year in a row (it shared first place with Australia in 2018) that the UK ranks as the most popular country for veganism in the world. So popular is plant-based eating here that five of the top 15 cities worldwide are in the UK.

Australia has one of the largest vegan communities worldwide and was the most popular country for veganism in the world for 2 years.

Climate change and its severe impact on Australia felt through extreme heat waves has only added to the debate about farming and meat consumption. As a result, meat-consumption has started to decline in Australia, though Australians still consume more meat per capita than pretty much most of the world.

With over 5% of the population claiming to be vegan, Israel is clearly taking up the vegan trend. Health, environment, and animal cruelty are major factors.

But unique to this newly-formed country is the mix of the traditional Mediterranean diet of the area and the strict dietary laws of Kosher food – the separation of meat, dairy, and parve, which is pretty much vegan apart from the fish gelatin and honey, which means it has been easy to embrace veganism.

And with less than half the population being native to the region, the immigrant mindset of looking for something new has to be a big reason veganism has become so popular.

Austrian cuisine is packed full of meat and dairy – check out the list of 16 most popular Austrian foods on Wikipedia where the only veggies are horseradish, onions, and sauerkraut.

So it’s a comforting surprise to see Austria at its all-time high for veganism and ranked 4th in worldwide vegan-embracing countries. According to Veganonboard, 1.2% of the population live a vegan life and you can now even find a vegan schnitzel and strudel.

Another meat-loving country turning vegan, New Zealand may have slipped in the rankings (it rose to 3rd position in 2018) but that’s more about the rise in Israel and Austria than any loss of Kiwi interest.

Now, nearly 10% of the population are vegetarian and 1.6% eating vegan, the highest rate in Europe, and the numbers are increasing every year. Four German cities feature in the top 15 worldwide, and the country itself is becoming a leading producer of meat substitutes.

Despite its long winters making it a bit difficult to produce great quantities of veg, veganism is booming in this health-conscious, climate-savvy land. So much so, it is home to the first vegan school in all the Nordic countries, and is a leading force in vegan food innovations.

According to a 2019 survey, a full 31% of Swiss have reduced or completely cut out meat from their diet. That’s a huge number. And by including those reducing meat consumption, the figure is probably more reflective of the growing worldwide trend.

Picking up on this trend, Migros, the Swiss supermarket, this year launched a new V-Love barbecue range – just in time for a stay-at-home summer.

Changes in diet are always led by the people. But the government agency Health Canada actually prioritized plant-based foods over meat, seafood, and dairy in its 2018 Food Guide, giving the vegan trend a serious boot.

One survey reports the number of vegans in the country doubled between 2018 and 2020. It’s not just the vegan food that’s increasingly popular. Canadians don’t do things by half and they are embracing the full vegan lifestyle, from cosmetics to fashion.

Veganism has been popular in Ireland for some time, but the plant-based cuisine is enjoying an even bigger popularity lately. A recent Wellwoman Vegan study found nearly half of Irish people said they would go vegan for environmental and ethical reasons and 37% would change to a vegan diet permanently.

You know a country has embraced a plant-based diet when their meat sales fall. And that’s what’s going on in the Netherlands – sales of meat have dropped 9% since 2017. The trend is so fixed that butchers are now working with meat substitutes and supermarkets are increasing their vegan range, which rose 51% over the same period.

There can’t be many top 15 lists where the USA comes way down in 12th place – but that’s just how massive the growth in veganism is worldwide. If there were any doubt about the sustainability of the plant-based diet in the US, recent research shows there has been a 300% increase over the last 15 years. That’s a massive 9.7 million Americans following a vegan diet.

Oregon is the most consistently vegan state, driven of course by Portland, which has long been seen as the most vegan-friendly city (overtaken by Bristol, UK, in our survey this year).

Denmark is a world leader in organic food and that respect for nature is perhaps a key reason why such a herring-loving country now ranks as a top vegan destination.

But it has been slow getting started and vegan travelers have found it hard to find good vegan food outside Copenhagen. But if you are in the capital, there’s plenty of fabulous plant-based food to savor.

The last of the Nordic countries on the list, the number of Finns seeking vegan food quadrupled in the 4 years up to 2018. Finns don’t go vegan for environmental or ethical issues. Nor are they driven by health concerns.

They choose vegan for the taste. And that’s great, because plant-based is delicious. But rather than cook for themselves, many are relying on processed meatless foods, high in salt and sugar. Meatless does not always mean healthy!

One of the most prosperous countries in South America, Chile, is leading the vegan trend on the continent. Already used to a diet full of seasonal produce, the Chileans are looking big time at plant-based eating. Santiago now has 115 vegan-friendly stores and restaurants, and you’ll even find vegan empanadas and soy burgers on street corners.

This south western English city has long been a center of alternative living. It has snatched the crown for top vegan city from Portland in 2018 and has remained on top for the third consecutive year.

Portland has been the undisputed vegan capital of the world for more than a decade. Knocked from number one in 2018, Portland remains the US capital of all that is off-beat, including top spot in the nation for vegan-friendliness. Which makes a pleasant change from its criminal and racketeering past.

The capital city of Scotland, renowned for its annual arts festival and historic past, Edinburgh now claims the title of top Scottish city for interest in vegan food. Robert Burns might not be so impressed, as he so loved a haggis he a wrote it a poem!

For centuries the world leader in finance, banking, arts, fashion, music, politics, trade… it really has it all and now is leading the world’s global cities in veganism. Of all the global cities, London ranks the highest in plant-based interest.

This laid-back, cosmopolitan city has, surprisingly, been slow to take up interest in veganism. But this year Amsterdam takes joint 5th position and with it, the prize for most improved city ranking.

Yes, the city gave the world the hamburger. Yes, the city is proud of its culinary gift. But yes, they move with the times and are enthusiastically embracing the move to plant-based eating.

Germany’s cultural capital and city known for its awesome nightlife was one of the first to take up vegan choices, having once ranked world’s vegan capital.

Known as England’s second city (it isn’t, but it likes to think so), Manchester is a northern powerhouse of sport, music, and commerce. And now it’s powering its infectious energy with vegan fayre.

Vancouver is a foodie paradise boosting an incredibly diverse food scene. The sea, the mountains, forestry, and nature make Vancouver a haven for nature lovers and a center for outdoor sports. So it’s a short step to a healthy, plant-based vegan diet.

The third German city in our poll, but according to PETA, veganism is so popular here that the city tops the vegan-friendly charts in the country.

Sitting between Portland and Vancouver, why wouldn’t Seattle love vegan? So committed are Seattle folk to eating plants, they have their very own vegan grocery store.

Dominating the Middle Eastern vegan scene, Israel’s capital is the only city of the region on the vegan map.

Famous for an apple and potato dish Himmel un Erde, it seems Kölner’s are branching out in their plant-based choices.

Vegan choices have blossomed in Glasgow’s eat out scene over the last couple of years, and the city now boasts being a Scottish vegan center, second (again) to Edinburgh.

For all the horrors of Covid-19, it seems it has had a big influence on people’s eating habits. People are not only looking to improve their health but are also taking a long hard look at how food production affects the environment and turning to more sustainable eating.

Only cities with a population of over 100,000 were included in the study.

Fair Use and Redistribution

Chef’s Pencil grants you permission to reuse, host, or repost the graphics and images from this article. When doing so, we ask that you kindly attribute the authors by linking to Chef’s Pencil or this page.

Media coverage from prior years

Our veganism popularity reports have been featured in over 100 publications world-wide, in addition to dozens of TV and radio stations. Check out some of our past media coverage in Newsweek, Guardian, Quest France, Stuff New Zealand, Vegan Food & Living, Expressen Sweden and Courier International.