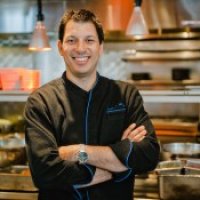 Rodney Murillo, Culinary Director and Vice President of Davio’s Northern Italian Steakhouses, hails from Costa Rica. As a young adult, Murillo relocated to Boston to pursue his interest in the culinary arts. Not yet fluent in English, Murillo overcame this barrier while learning everything he could about the art of cooking.

Murillo’s fascination with food started early. Growing up on a farm in Costa Rica, he gained an appreciation for every aspect of food preparation. Murillo remembers that all meals prepared by his family used only the freshest ingredients, a tradition he strives to maintain to this day.

Murillo’s talent and dedication allowed him to quickly rise through the ranks to Executive Chef of Davio’s Restaurant. As the Davio’s empire grew, Murillo was promoted to Culinary Director and Vice President, overseeing all of the Davio’s kitchens.

Murillo has had the opportunity to work alongside some of the most prestigious chefs, including an apprenticeship at Pasion in Philadelphia and Daniel in New York City. In furtherance of his career, he has traveled to Portugal, Spain and France where he was able to research the food of each country, which included dining at several of Europe’s Michelin star restaurants.

In 2009, Murillo was invited to cook at the James Beard house, which he considered a huge honor. He takes great pride in being a self-taught chef and working with many of the same people who have nurtured him through his years at Davio’s.

Murillo has competed in various competitive Food Network television shows including Rewrapped, Cutthroat Kitchen and was recently a finalist on Beat Bobby Flay. He is a regular on many TV programs such as NESN’s Dining Playbook with local Boston personalities Billy Costa and Jenny Johnson.

Rodney is active in various charities and nonprofit events in Boston and beyone. He is a representing Chef for Taste of the NFL on behalf of the New England Patriots which is a nonprofit which raises millions of dollars for the Greater Boston Food Bank and food banks across the nation. He also participates actively in the national nonprofit Best Buddies created by Anthony Shriver. Yearly, alongside Tom Brady and Guy Fieri, he participates in the Best Buddies Challenge event. Davio’s employs workers from the Best Buddies Jobs program whom Rodney oversees to make sure they are thriving and successful in their employment. He participates in Share our Strengths, Taste of the Nation in Boston, Atlanta and New York City. He is passionate about children’s charities which include Tufts Medical Center, Boston Children’s Hospital, the Cam Neely House and Rodman Rides for Kids.

Murillo lives in Boston with his wife, Audrey, and their two children, Joaquin and Lola.