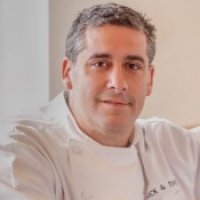 All posts by Joseph Realmuto

Joseph Realmuto began his culinary career at the Culinary Institute of America. While attending CIA in 1991, he interned and then worked under John Laughran at the River Cafe in Brooklyn. Upon graduation in 1993, he spent his first summer in the Hamptons, NY at Nick & Toni’s. Realmuto returned to Manhattan for the off- season and landed at Park Avalon in Manhattan. At Park Avalon, Realmuto worked all kitchen stations for owner Steve Hansen, under chef Jim Botsokis.

In early 1994, Realmuto returned to his summer job and began what was to be a long relationship at one of Long Island’s most critically acclaimed restaurants, Nick & Toni’s. Joe was initially hired as a line cook and for the next two years he honed his skills as sous chef under executive chef Paul Del Favero before becoming the chef de cuisine in 1996. During his stint as sous chef under Del Favero, Nick & Toni’s received two stars from the New York Times’ Ruth Reichl, was awarded the Golden Dish Award from GQ and received high praise from Food & Wine when they claimed that “Nick & Toni’s is the best Italian restaurant on the East End.” Late in 1996, Realmuto was named Nick & Toni’s executive chef. In 2001, Nick & Toni’s received a three star review or an “excellent” from The New York Times and was awarded a “very good” in 2015 from The New York Times following their 25th anniversary. In 2008 and 2011, Realmuto was a guest chef at the James Beard House. Realmuto has created and overseen the opening of three additional restaurant concepts with Honest Management Company – Rowdy Hall, an English-style, French bistro pub; La Fondita, an authentic Mexican takeout spot; and Townline BBQ, an authentic Texas style BBQ joint.

Realmuto has appeared alongside several celebrity chefs on the Food Network. He appeared on five episodes of Ina Garten’s show Barefoot Contessa, cooking signature dishes from Nick & Toni’s, La Fondita and Townline BBQ. He also was selected as a judge alongside Bobby Flay on The Next Food Network Star. Giada de Laurentis featured Nick & Toni’s and Realmuto on a 2007 episode of Giada’s Weekend Getaways. He was also commissioned to participate in The Q, a BBQ festival hosted by Paula Deen and her sons in Miami Beach as part of the South Beach Food & Wine Festival. Realmuto has appeared several times on Geroge Hirsch Lifestyle on PBS. He was recently featured on ABC’s The Chew in the fall of 2014 and appeared on FOX NY’s Good Day New York cooking up some Townline BBQ out of the company’s mobile smoker.
Realmuto has a devotion to local and organic produce in his menus. He helps maintain the 1-acre organic garden behind Nick & Toni’s, where he harvests items in season that go right to the plate. He is also involved with the Hayground School’s “Young Chef’s Program,” a chef-lead workshop for young children. He maintains relationships with many local farmers and produce suppliers supporting East End farms such as EECO farms, Satur Farms and Quail Hill Farms. In 2007 Realmuto spearheaded the creation and establishment of the Springs School Seedling Project. The Seedling Project has built a greenhouse at a local public school, Springs School, where Realmuto’s children attend. The mission of the project is to teach children about growing produce, cooking healthy and eating healthy. Realmuto’s dedication to the community doesn’t end there, he sits on the board of the after school program Project MOST for East Hampton and Springs schools. He can also be found volunteering for the local soup kitchens at the local churches in the community.

Like 0
Read More
Comment
Share
Marinate the onions in the lemon juice (overnight is better) Toast the cheese under the broiler till black, then cool and shred Combine the onions (with juice), cheese, and remaining...