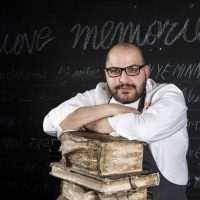 All posts by Antonio Bachour

Antonio Bachour is an American pastry chef. In 2011, he was named one of the ten best pastry chefs in America, and he subsequently won the 2012 Zest Award for Baking & Pastry Innovator after having been nominated for the 2011 award. Zagat has described him as a “confection master”

Share
How to Make it: Preheat the oven to 325°F/160°C In a bowl of a stand mixer fitted with a paddle attachment, add butter, flour, sugar, salt and almond flour and...

Like 8
Read More
Comment
Share
How to Make Strawberry Gel: Soak the gelatin in cold water. Heat the puree to 60C and add the gelatin to dissolve. Mix with lemon juice and set aside in...

Like 3
Read More
Comment
Share
How to Make the Sable Dough: Preheat oven to 160ºC/325ºF. In the bowl of a stand mixer fitted with a paddle attachment, cut the butter into small cubes and place...