Employment for Chefs and Head Cooks are Near-Record Levels

Note: We just released our 2020 study on employment and salary trends for chefs and head cooks in the US.

Employment for chefs in America has risen to record levels over the past couple of years according to the most recent employment data published by the Bureau of Labor Statistics. The number of chefs and head cooks in the US was 131,430 in 2017, up a staggering 46% from 2011, when it recorded the lowest level in two decades. However, the 2017 numbers reported by the Bureau of Labor Statistics were  3,000 short of the all-time high reported a year prior to that, in 2016.

The strong job gains are not evenly distributed geographically. Compared to ten years ago, 13 states saw a very solid growth in chef ranks with an increase of more than 50%. The states with the strongest employment gains among chefs and head cooks are:

Moreover, in the years following the recession, chefs and head cooks started to earn more than the average American.

This trend has reversed over the past few years, but given the strong job outlook for chefs, it is very likely that chef salaries will again surpass the national average. 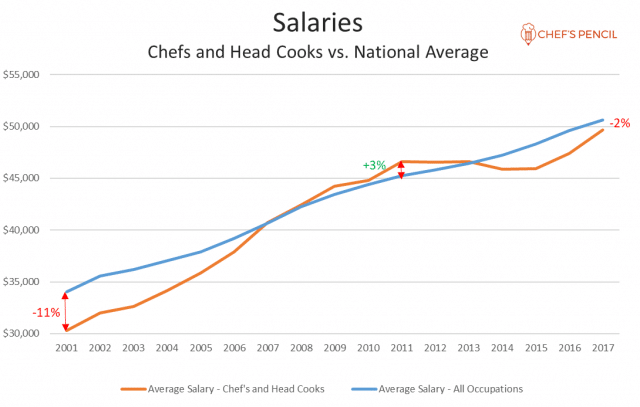 Is a Chef Promotion Worth it? Data says Yes!

Not only do chefs and head cooks earn more than twice that of regular cooks, the gap has increased steadily over the past 10-15 years. A chef or head cook earned $30,330 in 2001, 58% more than a restaurant cook, but now the gap has widened to 88%.

This trend is not at all surprising, as the pay gap between managers and employees has widened across all industries and has become a global trend. This is unlikely to change in the near future as the current economy favors high-skilled workers. Paycheck raises will follow this trend.

It is no secret that salaries in America differ substantially based on where the job is located. The food industry makes no exception. While the national average for chefs and head cooks stands at $49,650, chefs in Hawaii are paid on average $70,480, almost twice as much as their counterparts in Kansas ($36,470) and South Carolina ($37,110).

Best and Worst Paying Metros for Chefs and Head Cooks

While many chefs are self-taught, formal education at a culinary school is generally considered very valuable. However, when 18 new restaurants are opened every day and the food service industry is firing on all cylinders many cooks and chefs forgo formal education.

A spokesperson from the Oakland Community College, which offers a Culinary Arts program, tells us Community colleges have a counter-cyclical pattern to employment, when the economy is good, people are working and we see declines in enrollment. When the economy is down, our enrollment soars as individuals re-skill, retrain and go back to school.

“Our current demand for the culinary program mostly reflects these trends. There are also regional influences with the Detroit-metro area experiencing an exciting food mecca & foodie paradise of growth. Interest and demand is up [in Detroit].”

A similar view was echoed by David R. Ludwig, Assistant Director at the Hotel, Culinary Arts and Tourism Institute at Ann Arundel Community College. David tells us Employment in the hospitality industry is very high right now. This, however, means that our enrollments are very low.

The hospitality industry does not value degrees, and many students find themselves in a tug of war between school, which provides for them a broad background that will serve to help build a viable career, and their employers who only care if they are able to complete the task of the day.

While the enrollment slowdown has been unforgiving for some, other schools are thriving. Ronald Hayes, Assistant Director at the Culinary Institute of America, one of America’s best culinary schools, tells us that they are seeing higher enrollment numbers at all their three campuses.

“Students seek a wide variety of careers within the very broad “Culinary” world. The experience at CIA helps to shape students’ career goals, as college should. Many students arrive seeking to be chefs. Once exposed to the front-of-house and wines courses, some realize their passion is with direct guest interaction.”

“Others seek to go deeper into the science and systems behind food production. Still others seek to manage business, and others to make a social difference through food. Whatever their specific career interests, all of our students share the love of food as a common bond.”

“We [i.e. CIA] are a culinary college, as opposed to a cooking school—we expose students to management, humanities, and science, as well as technique. We are successful because we understand that we are educating the next generation of leaders, rather than focusing on just training today’s workforce. We have highly-qualified faculty, tremendous student support staff, and remarkable facilities. Our campuses are our students’ communities.”

With the restaurant industry so hot right now, many fear it is overheating. Excessive restaurant openings will bring fierce competition that will lead to many closures as well. For chefs, it might be a good time to think about long-term career goals and how to make the most of these very dynamic times.

Photo by Timur Saglambilek from Pexels