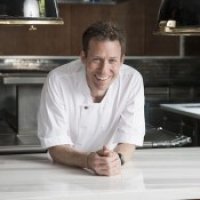 All posts by Ryan Hardy

Ryan began his career in professional kitchens in 1999 at the famed Rubicon Restaurant in San Francisco, owned and operated by Drew Nieporent of Myriad Restaurant Group. He quickly climbed the ranks in the kitchen, and in 2001 Ryan took the reins of his first restaurant, Rustique Bistro, in Aspen. In less than a year, Rustique was named among Esquire Magazine’s Best New Restaurants. Ryan left to assume the head chef role for James Beard Award Winner Chef Mark Miller at the Coyote Café in Santa Fe.

In 2003, Ryan returned to work for the Myriad Group on Martha’s Vineyard where he earned himself a Rising Star James Beard Nomination. And, as the founder of New England’s second Slow Food Chapter promoting the island’s farmers and fishermen, Ryan was named alongside Alice Waters as one of the ‘Most Sustainable Chefs in America.’

Ryan returned to Aspen in 2005, to The Little Nell Hotel. Furthering his sustainability record, he founded Rendezvous Organic Farm, spawning a market for locally grown pork, lamb, chicken, cheese, charcuterie and heirloom Italian produce previously unavailable in the U.S. Armed with these ingredients and intel gained from annual trips to Italy to master the art of pasta, Ryan developed the style in the kitchen that he exhibits today – handmade, soulful cuisine. Ryan was nominated four times from 2008-2011 as ‘Best Chef, Southwest’ by the James Beard Foundation for his work at The Little Nell.

When Ryan moved to NYC, he put his creative entrepreneurship and ambition to work and opened his first restaurant – Charlie Bird – in June 2013, with Sommelier Robert Bohr. Ryan and Robert built their careers in fine-dining establishments and combined their passion for the highest quality food, wine, and service into a more approachable environment, creating a new type of dining experience and appealing to a new generation of diners. Charlie Bird’s Italian-inspired menu showcases Ryan’s inventive culinary style balancing flavors and textures; it became an instant classic receiving wide acclaim including Two Stars and Critics Pick by NY Magazine, Restaurant of the Year by Eater and The Infatuation, and one of the Best Restaurants in NYC by Condé Nast Traveler.

In February 2016, Ryan opened Pasquale Jones, with partners Robert Bohr and Wine Director Grant Reynolds; together they launched The Delicious Hospitality Group. The Pasquale Jones experience features wood-fired food in a beautiful, comfortable space while maintaining the team’s high level of hospitality standards. Pasquale Jones rounded out its opening year as a media favorite, winning accolades from The New York Times’ Pete Wells, who named the Clam Pizza one of the “Top 10 Dishes of 2016”; Eater awarded the restaurant one of its coveted “Best New Restaurant” titles; and The Infatuation placed Pasquale Jones at the top of its “Best New NYC Restaurants of 2016” list.

The Delicious Hospitality Group continues to thoughtfully expand their offerings, most recently with their multi-experience venture in Hudson Yards neighborhood including a restaurant with private dining and bar called Legacy Records and Easy Victor café.

Share
Rinse the razor clams to remove all residual sand. In a large sauté pan over medium heat, add the EVOO, garlic, fennel, shallot and cook for 30 seconds. Add the...