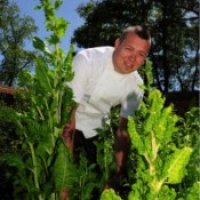 All posts by James Golding

A local Dorset boy, James Golding left his home at just 16 to pursue his culinary dreams.

It was whilst still a student on the Specialised Chef course run by The Academy of Culinary Arts (formerly Académie de Culinaire de France) at Bournemouth College that James was handpicked as a trainee by none other than The Savoy Group.

Within three years he had completed all sections at the Savoy and had a firm grasp of classical French cooking.

In 1998 James was offered the position of Chef de Partie at Le Caprice working under Mark Hix and later Elliot Ketley.

James stayed at Le Caprice until 2001 when Head Chef Tim Hughes offered him a new position at the seafood restaurant J Sheekeys. By 2005 he had progressed to Sous Chef, helping to restore the restaurant to its former glory and honing his own skills as well as learning how to motivate and train junior members of staff.

It was these leadership qualities that Elliot Ketley drew heavily upon when he placed James in charge of the 6th floor restaurant at Soho House New York. Whilst on the other side of the pond James also took a two week sabbatical to lend his talents to the exclusive members’ only Oscar party that Soho House Hollywood hosts annually in LA.

In 2006 James returned to his home on the south coast as both a seasoned chef and new father. His work began to be increasingly inspired by the region and its unique produce, from both forest and sea. James sought out and supported small producers and local butchers and became a passionate advocate of provenance and seasonality, all of which he brought to bear as Head Chef at Harbour Heights in Sandbanks.

In 2009 he was brought on board by Robin Hutson to launch Simply at Whitley Ridge, Brockenhurst, after the hotel was bought by the Lime Wood Group.

Now as Head Chef at THE PIG, James brings all his creativity to bear on a menu which once again is based on the finest and freshest seasonal ingredients that are produced sustainably and locally.

Like 0
Read More
Comment
Share
Head Cheese or Pork Brawn is a cold-cut that originated in Europe. The Head Cheese recipe presented below was submitted by Chef James Golding, who runs the kitchen of the...