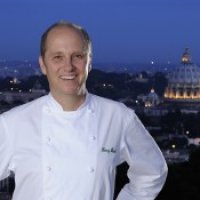 Nowadays, Heinz Beck is known as one of the most notable “Masters” of gastronomy in the world.

His unique interpretation of the “Modern” kitchen goes beyond his undisputed culinary talent, but includes the utmost attention toward the selection of ingredients and their transformation into highly innovative flavors.

Beyond an excellent career as a highly decorated Chef, Heinz Beck has been heralded as a leader in Italian and Mediterranean culinary tradition. Among numerous awards, Chef Beck has been recognized by “Michelin”, “Bibenda”, “Gambero Rosso” and “L’Espresso” (just to name a few).

His profound understanding of the culinary culture is revealed in several of his texts, which address more than culinary practices.

Among all, one of the best sellers in the past year is Beck’s “L’Ingrediente Segreto” (The Secret Ingredient). His other noteworthy works include “Arte e Scienza del Servizio” (The Art and Science of Service), “Heinz Beck”, “Vegetariano” (Vegetarian), “Pasta Heinz Beck” and the ingenious “Finger Food”. Furthermore, Beck has tackled nutrition and healthy culinary practices in “Ipertensione e Alimentazione” (Hypertension and Nutrition) followed by “Consigli e ricette per piccoli Gourmet” (Tips and recipes for young Gourmet) always in collaboration with a big Italian pharmaceutical company.

His latest book is titled “Best of Heinz Beck”, published by Giunti Editori (2017).

In the year 2000 Heinz Beck is awarded with the “Gold Medal at the Foyer of Artists”, an international prize of the University of Rome La Sapienza, awarded for the first and only time in 40 years to a Chef.

In 2010 he is the recipient of the recognition of the “Knight of the Order of Merit” from the Federal Republic of Germany awarded by the Minister Friedrich Däuble.

Always in 2010 Heinz Beck and others 10 Italian Top Chefs decided to join their forces and found the “Order of the Knights of Italian Cuisine”, in order to communicate with National and International institutions, as well as the media, as a united front.

In 2014, thanks to his strong and persistent attention towards health and innovation in gastronomy field, Heinz Beck was awarded during the tenth edition of international Congress Identità Golose with the prize “Chef of the year” and with the “Lion of Venice Career Award”, conferred by AEPE during the sixth edition of the Congress Gusto in Scena.

Always in 2014, a new, unprecedented prize, testament to his growing interest in nutritional values and benefits of food on the body; the award “Taste & Health”, assigned to Chef Heinz Beck in occasion of the presentation of the Guide of Rome 2015 by Gambero Rosso.

In 2016 he is nominated Ambassador of Extraordinary Italian Taste by MIPAAF, the Italian Ministry of Agricultural, Food and Forestry Policies, for the promotion of Italian Cuisine worldwide. In the same year he was also awarded with the prize “Italian Excellence”, symbol of the first edition 2016 of Italian Excellences Festival.

In 2017 he received an award by Fiasconaro, a famous brand of Sicilian pastries, called “Gusto Divino 2017” during the Divino Festival at Castelbuono, in the south of Italy; in the same year he has been awarded with “Kitchen & Management” and “Internationalization” prizes during the Food Community awards in Milan.

2018 started with the awarding of the “Excellent Prize”, at the Oscar of the culture in Hospitality Industry. In March 2018 he received the Degree in Natural Bioenergies, which was awarded to him by the Popular University of Arezzo.

Careful observer of food effects on the body, Heinz Beck has been carrying on for almost 20 years Important cooperations with national and international scientists as well as Italian Universities concerning the good balance between food and health.

As an author of several noteworthy texts, today Beck consuls several businesses, offering the same attention to details that his Guests receive at “La Pergola” in Rome as well as in all his Restaurants worldwide (listed below), a testament to the genius of Heinz Beck.

Heinz Beck is truly a polyhedric genius of our time, in which different attitudes evolve into different arts, the true size of modern gastronomy.

Heinz Beck’s Restaurants around the World

Share
Tellycherry pepper is an Indian origin pepper, particularly suitable for this dish thanks to its distinctive aroma and particular fragrance. The Filling: Beat the yolks in a double boiler and...