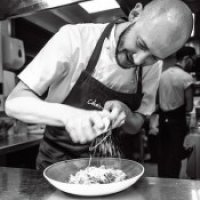 All posts by Davide Degiovanni

Born and raised in Northern Italy, Davide started his culinary career in Soho, London as chef de partie at the one Michelin starred Picasso Room is Escargot in 2002. In 2003 he moved to the now closed, Restaurant Teca in Mayfair, working up the ranks from chef de partie to sous chef. In 2005 Davide moved to the five star Baglioni Hotel in Kensington where earned the position of head chef. Two years on, Davide joined the kitchens of one Michelin starred Ristorante Semplice as sous chef before taking the position of Head Chef at Casta Diva restaurant in Moscow in 2008 for two years. In 2010 a return back to London to one Michelin starred Locanda Locatelli as sous chef followed. Davide’s last position before joining Gordon Ramsay was as Head Chef for the re-opening of Amaranto Restaurant at the five star Four Seasons Hotel in Mayfair. Davide Degiovanni is now Head Chef for Gordon Ramsay’s new venture Union Street Café in Bankside, London.

Share
Prepare a nice and light vegetables stock. Cut in small cubes the Taleggio. Chop the Shallots very thin. In a heavy based saucepan melt the butter and add the shallots,...