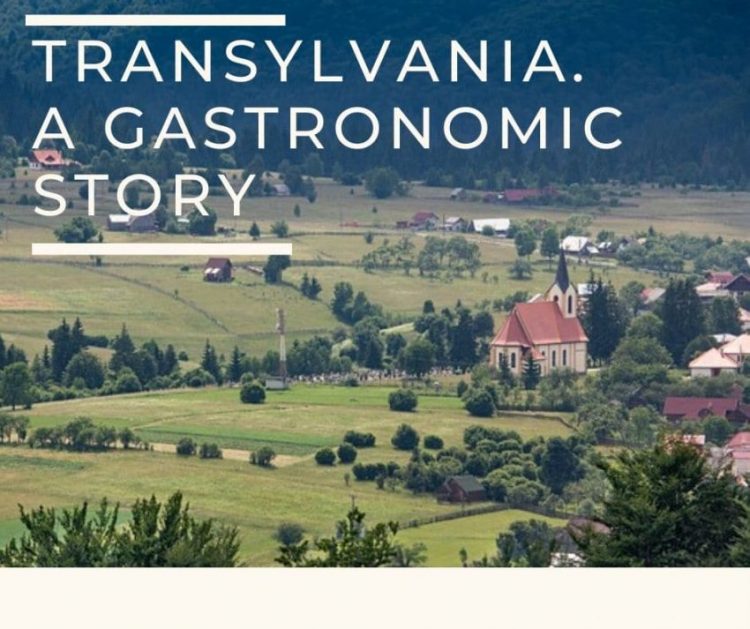 Transylvania is a land full of legends made famous by Bram Stoker with his dreadful Count Dracula. But the real Transylvania is nothing like that – it is a hilly picturesque region in central Romania, surrounded by mountains and dressed in fourteenth-century architecture, with gothic fortified churches and medieval fortresses.

Moreover, something that few people know about the region is that it was home to as many as 750,000 Transylvanian Saxons, a German ethnic group that settled in the region in the mid-12th century. Most either emigrated to Germany after the Second World War and then again after the fall of the Iron Curtain, but Saxon dishes or variations of them are still cooked and loved in Transylvania.

While the Saxons have left, Transylvania continues to be the home of a sizable Hungarian minority. Hungarians have lived in the area for ages and many dishes you’ll find in traditional restaurants in Budapest will also be called local foods here.

Besides Germans and Hungarians, Ottomans had a big influence on the local cuisine, as they did in the rest of Romania and the entire Balkan region.

Bread is ceremonial and the proper respect it demands is almost mystic as the unwritten laws demand certain guidelines and restraints: before cutting bread, the sign of the cross is made in the air, something that Dracula will not appreciate; it must always be placed on a clean white towel, meaning purity; it must never be placed upside down nor must a knife be left in it.

Never throw out leftover bread or crumbs because the last piece of a loaf resembles luck and power. The most popular and appreciated for its rich sweet taste, fluffy texture, and long life is potato bread. When making the dough, a part of the wheat flour is replaced with mashed potato and the best potato bread you will find is in Sibiu and Făgăraș.

Soup for the soul

Soups are highly appreciated in all their forms sour or sweet, rich or clear, they are like cheese is for the French and pasta is for the Italians.

As a part of everyday meals, there is a wide range of sour and sweet soups made from all kinds of vegetables and meats.

Specific for this region is the use of estragon, soured with sauerkraut or vinegar and thickened with flour and pork dripping called “rântaș”. Some soups are called “ciorbă”, which comes from the Turkish “çorba”, a people renowned for their broths that flooded the conquered nations’ tables.

If Bram Stoker’s story sends shivers down your spine, then cumin soup is the perfect comfort food, also to be enjoyed on winter days as a soul warmer. This childhood cold remedy is easy to make with few ingredients but packed with flavors. All you need is cumin seeds, sweet paprika, one big onion, bone or vegetable broth, salt and a little flour. It’s served hot with croutons.

Another highlight among stews is “Tocăniță ardelenească de cartofi”, which is made with potatoes and smoked sausage or smoked pork. On fasting days, it’s made without the meat, but if you use smoked paprika the taste is not so far from the original.

A really popular dish is “Ciolan afumat cu fasole”, a hearty and rich stew made with smoked pork leg and beans. It is said that army cooks whipped it up for soldiers and it became so popular that no household is a stranger to its aroma and it’s very sought after among commuters, professional drivers, and tourists as it’s very filling and tasty.

The pride of the Ardeal region, this dish became the staple food prepared in large amounts on National Day and is served with pickles to the people eating it outside during festivities. A similar dish with the same ingredients but more broth is “ciorba”, often served in a fancy way inside a bread crust specially baked in a the shape of a bowl with the inside bread removed. The dish goes best with red onions and țuică.

In Brașov we find “clătite brașovene”, a kind of pancake that carries the town’s name. But they are not quite as you’d expect them to be as these are something else and are a definite must try. The story behind this dish is that a German family had to feed numerous children so the parents took moussaka and used it as a filling for pancakes, which were fried in the pan before serving. This tourist delight is now made with beef and mushrooms and the folded pancakes are fried in a batter with eggs and breadcrumbs.

After making it through to dawn, regain your strength over a cup of fragrant coffee for which we know just the perfect company, and it’s not Vlad the Impaler but he might want to join in because this apricot cake is irresistible. Aprikosenkuchen, by his foreign name, is a beautifully flavored apricot sponge cake that most Germans know how to make by heart. The classic recipe is simple but the result tastes so complex: the butter is creamed with sugar, vanilla, eggs, and lemon zest that will later incorporate the remaining dry ingredients (flour, baking powder, and salt). The batter goes into a buttered pan with apricot halves placed on top facing down and the whole thing is put in the oven to golden nicely. Devilish delicious!

Henklesh is a savory, moist pie baked with leavened dough made with flour, warm milk, butter, one egg, sugar, and yeast. On top of it rests a delicious topping make from mixing sour cream with eggs, sugar, vanilla, and butter, and it is sprinkled with raisins. Traditionally it’s baked in bread ovens over a wood fire.

“Găluști cu prune” (sweet dumplings with plums) is an old recipe passed down through the generations known as “gomboți”, “gombóc” or “knédli” among the Hungarian population and “Knödel” in Germanic parts of Romania. Whole stoned plums are wrapped in a potato-based dough forming a ball. They are then boiled and rolled through breadcrumbs, sugar, and cinnamon.

You might know this dessert from the previous post about popular foods in Romania, but if you don’t, you have to try them! “Papanași” is a perfectly balanced sweet and sour dish consisting of two donuts made from cottage cheese, semolina, and sugar and topped with sour cream and fruit preserve, usually blueberry.

Rhubarb Pie first appeared in a collection of recipes under the name of New System of Domestic Cookery by Maria Eliza Rundell, in 1807 in the UK and later translated into German.

This way the recipe was brought to Transylvania and rhubarb was no longer just a medicinal plant but a bitter ingredient that pairs well with sweet. Containing high levels of calcium, rhubarb is good for strong teeth, and you know whose. If you find yourself visiting these parts of the country, you should also try rhubarb jam and rhubarb soup.

The sweet bread made for every Easter and Christmas is “cozonac” filled with walnuts. It’s one of the must haves or should I say “must smell” aromas from the holiday bouquet of fragrances and it is a definite crowd pleaser. Not so easy to make, “cozonac cu nucă” is the pride of every housewife, the key to your mother-in-law’s heart, omnipresent on festive tables, and a popular basket gift, for a good and tasty reason.

Another sweet bread and a specialty of the Hungarian minority in this part of Romania is Kürtőskalács. They aren’t made at home anymore but are very popular at fairs and festive events. The name comes from their hollow cylindrical shape and the fact that traditionally they were baked over an open flame, with the dough wrapped as a spiral on a wood tool. The finished product is sugar glazed and flavorful.

Before cutting through the meat, let’s take a quick look in the pantry to discover a treasure hidden in a dusted jar: “zacuscă”, an eggplant chutney. The unique and rich flavor of this vegetable spread is obtained from a three-way process of roasting, baking, and boiling eggplants, onions, and peppers, which is seasoned with salt and black pepper. All you need for the best breakfast or snack is a slice of bread.

The smell of grilled “mici” or “mititei” tickles the nostrils just as the grass covers the earth and the sun warms up the air. Going by the name of “little ones”, these rolls of minced meat and spices are the delight of every barbecue and picnic but are also a star among street foods.

Some say that in old times “mici” were made not with baking soda but with crème fraiche, which ferments into sour cream after being incorporated into the meat mixture. This special ingredient, that unfortunately is not used anymore having been replaced with a less natural one, makes the consistency very fluffy.

Sarmale (stuffed cabbage leaves) is another traditional and popular dish, of whom we also found a novelty. In the very beginning, housewives used smoked and fresh cuts of pork, unlike nowadays when the recipe features minced meat not exclusively pork.

The mixture consists of minced meat, rice, onions, and spices and is rolled up in fermented cabbage leaves and left to boil in sauerkraut water and tomato juice alongside some pieces of smoked ham. Served hot with cold sour cream, this dish will make your mouth water. The secret to melt-in-the-mouth “sarmale” is to cook them in the oven in a clay crock-pot.

Resembling stuffed cabbage leaves but in a deconstructive way is another famous Transylvanian dish called “Varză a la Cluj”. It contains the same ingredients as “sarmale” but has a different architecture as the dish is built with layers of sour cream, cabbage leaves, pork, and rice mixture ending with a layer of cabbage and sour cream. Everything stays in the oven for at least half an hour before being served.

Foreigners might already know that polenta is a Romanian staple food but there are different ways in which polenta meets the dish: Balmuș and Bulz.

“Balmuș” is something that shepherds prepare on holidays or when hosting guests. First, they melt butter in a pan, then add some cheese and cornmeal, and stir over a slow fire until it’s done. The result is more than you can expect from such simple ingredients.

A variation of the same scenario is “Bulz”, which can be found at every farmers’ fair and restaurant, but the best is made in peasants’ houses, and they will be happy to amaze you with their traditional food. Delicious “bulz” was whipped up out of necessity on cold winter days with ingredients already found in the pantry.

The simple polenta takes the form of a ball that shelters sheep cheese and sometimes eggs and bacon, cooked on an open fire while aromas are developing inside, otherwise “bulz” is finished in the oven. The best place to enjoy these golden treasures is at Mărginimea Sibiului, a place with long transhumance history and very hospitable people.

Apart from legends and legendary foods, Transylvania is a place with many delights and friendly people that will open their homes and lay their hearts on the table. Traditions are best kept in the villages and if we wonder why food is always better at grandma, it is because she still cooks like they did back in the good old days, allowing food to take the time to be properly done.

Adina has a passion for healthy living and exercise. She has a certificate in plant-based nutrition from eCornell and loves nature. She also loves reading, good coffee and exploring new places.