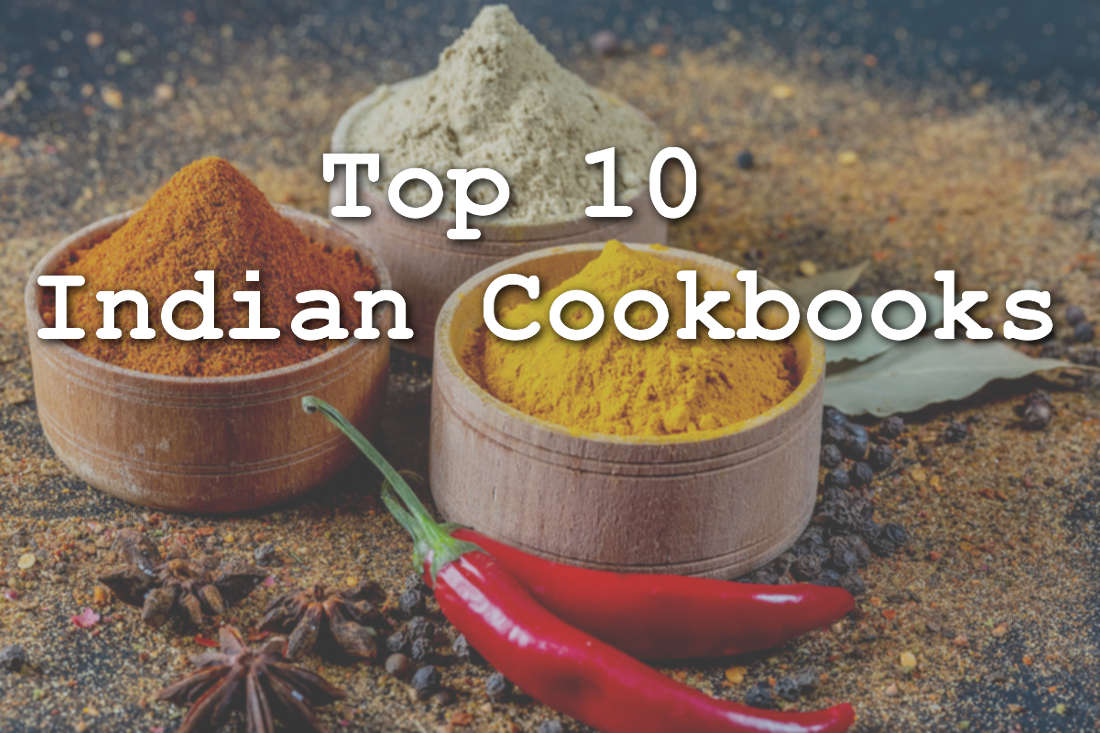 We absolutely love Indian food and here at Chef’s Pencil, we are committed to publishing Indian recipes on a regular basis. However, we are getting a lot of questions from die-hard Indian cuisine fans about the best Indian cookbooks out there.

India is a huge country (13 times bigger than the UK) and Indian cooking varies greatly from region to region, influenced by its geography, dominant religion, dominant caste or regional history. Dishes can vary within regions as well, with the same dish being prepared differently by different castes of the same religion, says Chef Rupen Rao in an interview for Chef’s Pencil.

Read on to find out our best ten Indian cookbook recommendations (in no particular order).

Madhur Jaffrey is an Indian super-star, actress, food and travel writer, and she gets credit for bringing Indian cuisine to the Western world. One of her best books, Indian Cookery, is regarded by 1000 Cookbooks, an app with curated cookbooks, to be the best Indian cookbook ever published.

Now is its second edition, Indian Cookery will walk you through Indian cuisine from classics such as Rogan Josh, Chicken Tandoori and Indian breads to more exotic dishes such as Drunken Orange Slices.

Selling more than one million (!!!) copies, 50 Great Curries of India is one of the most popular Indian cookbooks ever published. This book is a perfect introduction to Indian curries for novice home cooks as it showcases authentic Indian curries from various regions.

Born in Mumbai and now living in Washington DC, Rupen Rao has made a name of himself by teaching Indian cooking at CulinAerie and other prestigious cooking schools in the US. Rupen learned to cook from his mother, who then wrote him a cookbook when he moved to the US – which unsurprisingly is Rupen’s favorite Indian cookbook ever.

As far as his own cookbooks, our pick is Indian Cooking – Popular Restaurant Dishes. It brings restaurant-style Indian food to your own kitchen from a collection of the best recipes found in the best Indian restaurants in Europe and the US. Butter chicken (the recipe featured on the cover) is one of Rupen’s favorite recipes in the book, and he was most gracious to share it with Chef’s Pencil.

Written by one of Australia’s top Chefs, Tasting India is a travel and cooking book that recounts Christine’s journey through modern Indian. The first edition was published in 2011 and contained a massive number of recipes (250!), divided into 10 chapters, each focusing on one region. The photography in the book is extraordinary and so are the recipes.

The second (expanded) edition of Tasting India was published in November 2018 in Australia, and February 2019 in India and the UK. It adds 30 new recipes to the already massive collection of Indian recipes and adds three new regions: Punjab, Hyderabad, and Gujarat.

Christine has published two delicious recipes from Tasting India on Chef’s Pencil, telling us that Indian cuisine offers an extraordinary repertoire of vegetable dishes that are full of flavour and easy to prepare in the home kitchen. Both these dishes with their gentle spicing can be served as stand alone dishes or as accompaniments to fish or meat, with ingredients that are readily available pantry staples.

This is a fun and accessible Indian-American home cooking book written by food writer Priya and her mother Ritu. Priya tells Chef’s Pencil that she wanted to write a book that talked about her experience growing up as an Indian kid in Texas who very much got caught between her American and Indian backgrounds.

Do you have a rule about capitalizing recipes names? These aren’t but others are. It might be better to be consistent.

I Love Indian: Recipes and Stories from City to Coast, Morning to Midnight, and Past to Present by Anjum Anand

Anjum Anand is a prolific Indian cookbook writer and an award winning TV Chef – famous for her “Indian Food Made Easy” BBC series. She was one of the first writers to create and write easy-to-make and healthy Indian food recipes, which were incredibly successful in Britain.

Her latest book, I Love India, is a collection of Anjum’s absolute favorite Indian dishes and therefore a must-have. Along with Indian cuisine classics, this book contains exciting new fusion recipes inspired by the streets and ingredients of India, but adapted to our modern lifestyles.

In her book, Entice with Spice, Shubhra Ramineni attempts to destroy the myth that delicious Indian food takes hours to prepare. Given the book’s excellent ratings and reviews, she has clearly succeeded very well.

That  was Shubra’s goal from the onset. A first-generation American Indian living in Texas, Shubhra has enjoyed healthy, traditional food cooked by her mother. However, as she grew older and through her MBA, Shubra decided to adapt some traditional Indian recipes suitable for her, and pretty much everyone else’s, busy lifestyle.

From this book you can expect some less traditional, but still super delicious Indian recipes that are accompanied by high-quality photography and an engaging writing style. As with Priya’s Indian-ish cookbook, do not buy this book if you are into pure, traditional Indian cuisine.

What was? Succeeding well? or Destroying the myth?

Named best cookbook by the New York Times, Washington Post and the Food Network, among many others, Nik Sharma features 100 delicious recipes accompanied by amazing photography.

Nik tells Chef’s Pencil that he wrote this book from an Indian immigrant’s perspective to showcase how ingredients and techniques used in Indian cooking are versatile and adaptable to western kitchens. This book is about exploring flavor and loosening the rules around tradition.

What to expect from this book: Nik toys with flavor combinations, like chopping unripe green mangoes and stirring them into mayonnaise to make a verdant tartar sauce, or working an extract of caramelized fig and bourbon into glasses of iced chai – a perfect summary by the NY Times.

The popularity of veganism has exploded around the globe in the past few years, so any attempt to provide a bridge between veganism and the hugely popular Indian cuisine was destined to become a hit. And so it did.

Richa Hingle’s cookbook is now available in four languages and is one of the most popular vegan cookbooks out there.

One of Britain’s most celebrated chefs, Rick Stein details the author’s journey through India in search of the best Indian dishes. What makes this book outstanding is that the food is simply delicious, says Simon Davis of Zest and Herbs.

Spicing is generous, but the dishes never overpower with heat. And each curry has a unique flavour that reflects its origin, whether they are the Himalayas, Bengal or the tropical South, meaning even after using it regularly for almost a year, I’m still not bored of it.