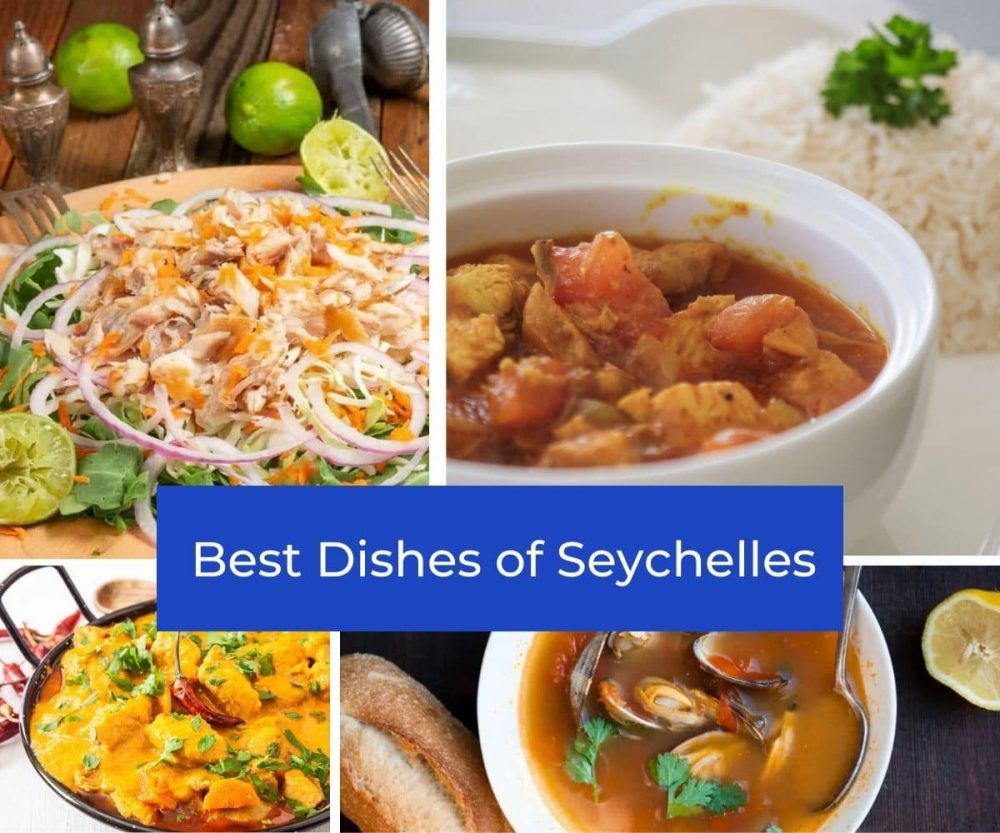 Seychelles is an island nation on the East Coast of Africa, made up of an archipelago of 118 islands that spans over 459 square km of sea.

Seychelles is best known for its beautiful beaches, clear blue seas and skies, the world’s largest nut, and the Aldabra Atoll. The main language is creole, which translates as a mixture of culture. This is what the Seychellois people and their cuisine are: a mix of cultures.

The Seychelles have no indigenous population. They were first populated by a group of French and later British settlers, who brought in slaves from western Africa and merchants from the East. Over time these people made Seychelles their home.

The preparation of most Seychellois creole food has roots in a combination of South Asian, Chinese, Malagasy, European, and Western African cuisine.

Due to the nature of the island nation, the traditional ingredients in most of the Seychellois creole cuisine consists mainly of things that would normally find on an island:

A lot of the cuisine centers around the island lifestyle and hence might be slightly difficult to capture outside of that context. It can be very rare to find these dishes outside of Seychelles or outside a Seychellois person’s home.

The main reason being that Seychellois Creole Cuisine is unique. It was born out of a fusion of cultures and relies on the artful blending of five flavors: sweet, sour, salty, bitter, and spicy.

With economic growth, globalization, and land farming and agriculture, Seychellois cuisine evolved to incorporate more meat and other farming products.

Some aspects of the cuisine are slowly fading as people orient more toward fast foods. However, the older generations still teach their young the delicacies that came from the vye marmit (a black heavy metal pot), where some of the best foods of creole cuisine comes from.

The first thing to note is that most of these dishes (except for the desserts) are usually accompanied by rice. This became a substitute for the traditional boiled cassava, which was used as a staple for carb intake.

This is a staple chutney, added to most dishes in creole cuisine. It is made from unripe papaya, which is grated, soaked and drained (the sap is not good for the stomach), and stir-fried with onions and chili.

This can be eaten as a side dish, snack, or a dessert. It is grilled over a wood fire, on a grill, or in the oven on medium heat. It’s nicer as a dessert when the breadfruit is ripe and has a yellowish color. The fruit can also be deep-fried as chips and served as a snack.

This used to be a side dish but now is eaten mainly as a snack as chips or in a dessert called ladob (see number 18 below).

This is a pretty simple dish. The fish is spiced with salt, pepper, some other spices, and, most importantly, chili. Traditionally this is wrapped and grilled in banana leaves over a wooden DIY grill.

Nowadays, a barbecue grill is the go-to means of grilling fish. The fish can be served with cooked lentils, rice, and papaya chutney.

This is a fish soup with various spices, and a fruit called bilimbi, that gives the soup its distinct and tangy flavor.

This dish is a sort of soup made with Chinese cabbage, which is boiled and eaten with fried fish. Interestingly, it is not consumed as a soup but with rice and papaya chutney on the side.

This delicacy is a chutney made by boiling, draining, and mashing salted fish into small flakes (like canned tuna) and stir frying it with onions and chopped chili. It is served with lentils, rice/boiled cassava, and papaya chutney.

This dish is a curry made out of moringa leaves (small round leaves), which give it a unique and specific taste. The salted fish is prepared the same way as for salted fish chutney, but instead of being stir-fried, it is cooked with moringa leaves and coconut milk.

Sometimes an ingredient called kari pile (another green leaf) is added to give the curry a distinct Seychellois creole taste.

Smoke fish salad can consist of mangoes, onions, lettuce, watercress, tomato, cucumber, and some lemon juice with salt and pepper. This can be eaten as a dish on its own or as a side to a main dish. This is one of the less traditional dishes of creole cuisine.

This is a rare delicacy mainly because clams have become a rare sight. Plus, it takes a lot of time to harvest enough clams (tektek) to make the soup!! Some people also add crab.

Tektek are not usually prepared straight after being harvested; they would still have sand in them. They are placed in a bowl of salt water for a few hours to get rid of the sand and other impurities.

This could be the most unoriginal Seychellois creole food. It is like a conventional chicken curry but cooked a little bit differently as it is made with locally made masala (curry) powder and kari pile.

This is an acquired taste for some but to most Seychellois people, it is a much-sought after delicacy. However, it is something you only have once in a while, as it takes a really long time to collect enough limpets, or bernik, to make up a decent sized curry.

Limpets act a bit like barnacles, clamped themselves tightly to rocks, usually found in the intertidal zones all around the Seychelles islands. They are cooked in coconut milk, local masala (curry) powder, and eggplant.

This is prepared in a similar way to kari bernik but incorporates other crustaceans too: hermit crabs, light foot crabs, lalang bef (another type of selfish), and clams.

This is a seasonal dish for when octopi are harvested. It is prepared by boiling the octopus, cleaning it of any ink and impurities, and cutting it in little chunks. Eggplant, onions, garlic, kari pile, masala (curry) powder, and coconut milk are then added to it, and it is left to cook on a low heat. It is usually served with papaya chutney and rice.

Hint for preparation: Grandparents will tell you to boil the octopus with unripe papaya (used for chutney), since the sap from the papaya is a believed to be a natural meat tenderizer.

This is a curry made from the soft skin of a shark’s head. This part of the skin is fattier and more tender.

The meat is boiled, scrapped (sharks have very tiny scales), and cooked with eggplant and all the ingredients also added to octopus curry.

This is prepared similarly to salted fish chutney. However, because of the tiny scales on a shark, the pre-preparation process takes longer.

The shark meat has to be boiled and then scraped of scales, to which there is an art. If this is not done properly, you’ll be crunching on the scales when you are trying to enjoy the chutney. After that, the meat becomes tender, so it is shredded and stir-fried with chili and bilimbi.

This is not caviar! The fish eggs are harvested from fish bought for a meal. It is always a pleasant surprise to find fish eggs in the fish you bought from market.

They can be fried and eaten as a snack or stir fried and incorporated into a cooked salad.

If you have a sweet tooth, you will love this one. This could be the favorite dessert dishes to anyone Seychelles born.

Ladob is made with tubers (sweet potatoes, yam, cassava) and plantain. These are peeled, cut in big chunks (or large slices for plantain), and cooked together in coconut milk, coconut oil, brown sugar, vanilla, and some nutmeg.

This is a nougat made with grated coconut that is cooked with very ripe banana r plantain, coconut milk, and brown sugar. It is usually not as hard as conventional nougat; it is actually quite soft and very sweet.

This is made with flour, rice, and sugar. It is quite unhealthy as it is deep fried, but it is a real sweet delicacy. Bakeries and shops usually sell out!

It is now illegal to harvest turtle meat in the Seychelles due to overharvesting (during colonisation) that greatly impacted the sea turtle population.

When it was legal to consume turtle meat, it was either eaten in a curry or grilled. Check out this great article by a Seychellois on sea turtle consumption and its history.

Sea cucumbers are salted and dried and served up as a salad or in a curry. It is a rare salad as sea cucumbers are not harvested that frequently. Most people from the Seychelles would tell you that this dish is an acquired taste.

Seychelles has its own distinct culture and way of life; Seychellois creole cuisine reflects this. You do not have to have a daring or exquisite palette to enjoy Seychellois cuisine, as most of it is prepared in very simple and natural ways.

If you plan to visit Seychelles, pop by the local restaurants and take aways to get a taste of creole cuisine. Seychellois people are very friendly and welcoming so do not be shocked if you get an invite home to taste the local food in a Seychellois/se kitchen. Try it! You wont regret it.

Sarentha Luther is a born and bred in Seychellois. She is a Clinical Neuropsychologist and has a passion for neuroscience and food. She is a fan of Seychellois cuisine, but also loves to try out new recipes from different countries.