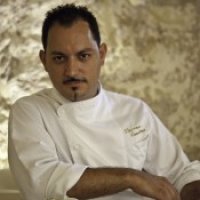 All posts by Vincenzo Candiano

Vincenzo Candiano was born in Scicli, where his father owned a small agriculture farmhouse. This was where he and his two younger brothers developed a passion for food.

Chef Candiano is married to Francesca with whom he has three gorgeous children, Giulia, Simone and Manfredi. He loves spending his free time with his family and often takes culinary advice from his grandma and aunt.

He likes his kitchen to be homely and simple. His favorite ingredients are aromatic beet tops, tomatoes, citrus fruit and spices. He admires French patisserie and finds it difficult to resist the temptation to taste and buy new cheese, whether Italian or foreign.

Through his career as a chef, he has always worked with humility and passion and tried to make the most of each experience irrespective of the venue.

In a sector where most chefs gain experience through working at Michelin starred restaurants, he has sharpened his culinary skills through “self-education”. He has done this with the awareness that putting together new dishes means more responsibility but that it is worth it because it helps him express his “own” cooking style.

He follows with great interest the vanguard kitchens however, has equal respect for the simple kitchens.

In 2002, he took charge of the kitchen at Locanda Don Serafino restaurant. Together, with the owners Giuseppe and Antonio La Rosa, he has created a restaurant that is known for the quality of the food and service. In 2007 they received their first Michelin Star and the second star was awarded in 2013. Six years ago, they transferred the venue to a unique new location, half of which is a natural cave and the other half is a large area constructed in the late 8th century. The cantina is located in the basement and has a rich collection of Sicilian and foreign labels.

The restaurant is situated in the historic city centre of Ragusa, Ibla, Barocca, overlooking a valley of Carob trees and Mediterranean flora.

Share
Pasta Knead all the ingredients until smooth. Rest the dough in the fridge for about 1 hour. Roll out the dough and make the spaghetti. Sprinkle with plenty of flour and and...