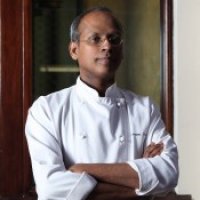 Sriram’s philosophy is to project Indian food in the right perspective. To use the right techniques and ingredients for a recipe and to learn from the real world, the real need and to cater to that real need without compromising on the foundation of the cuisine. To have fun while doing this, delight the customer and make money.

His vision on food is like everything else in the world – progressive. The progression is logical in this world and true with everything. Therefore the Quilon’s menu is amalgamation of Ethnic and Progressive dishes. For example – Black Cod, Asparagus and Beans and Ethnic dishes would be – Mangalorean Chicken Curry, Fish in Banana Leaf, Avial, Masala Dosa.

2011 : Named Beer Drinker of the Year by the All Party Parliamentary Beer Group for contribution to the beer industry. Has recently created a special 5 course all British beer menu – to add to the 5 and 8 course global beer menus, each course served with a different beer; has recently introduced Britain’s first Vintage Beer Menu boasting nine British beers from Fuller’s of Chiswick, ranging from their ethereal 1999 vintage right up to their succulent, youthfully exuberant 2010.

2010 and 2011 :for the past two years Quilon is one of the only two Indian restaurants mentioned in the top 100 restaurants in UK in the National Restaurant Awards.

2007 – till date :Is the only Indian Chef cooking in at the World Economic Forum, Davos for the past five years continuously.

2008 – till date : Awarded a Michelin Star for Quilon. Quilon has been awarded the Michelin one star five year running and the only southern Indian restaurant in the world to have a Michelin Star.

2003 : Quilon nominated as the one the five best Indian Restaurant in the Time Out food guide, London

Share
Heat 1 tbs oil in a pan and fry the red chillies, remove to a clean bowl. In the same pan, fry separately the pepper corn, cumin seeds and corriander...

Like 2
Read More
Comment
Share
Sauce Heat the oil in a pan and add fennel, onion, ginger and curry leaves stir and add turmeric, chilli and tomato. Cook until tomatoes are soft and add coriander...