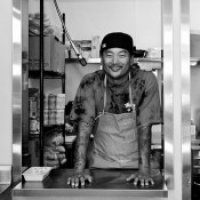 All posts by Roy Choi

During the Kogi era, street food was crowned king as Roy tapped into his own veins, digging deep into the base flavors that raised him on the streets of LA.

His stint at Chego! glorifies college dorm food and rice bowls to the max with a swagger and braggadocio that only OG peasant food can carry.

He’s since been named Food and Wine Magazine’s Best New Chef in 2010 and continues to break new ground with his offshoot Reiss Co. projects A-Frame and Sunny Spot. But before the awards, before the TV spots and all the bright lights, Roy Choi was a survivor of his own risks and impulsivities, and was a believer in the kind of magic that propels his career to this day. He’s currently working on his memoir, LA Son.

Share
This dish started as a fun food for us to enjoy in the truck and it just hit the streets with a force. Its spirit comes from Koreatown. First cook...