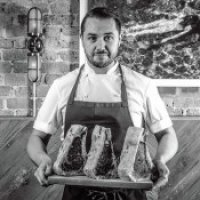 From the kitchens of pubs to the pass of Michelin Star restaurants, Owen Sullivan brings a wealth of varied experience to the Gordon Ramsay Group table as Head Chef of both maze Grill Park Walk and maze Grill Royal Hospital Road.

Owen was born in Surrey and grew up on the Isle of Wight where his parents ran a successful fish restaurant. Inspired by his parents’ passion for food, he moved to London at the age of 17 to start his chef apprenticeship at the prestigious Mandarin Oriental in Knightsbridge, which at the time held 5 AA Rosettes and a Michelin Star.

From there, he worked within the kitchens of a number of high profile restaurants across the capital including Foliage under Hywel Jones; Lola’s; and at Damian Hirst’s Pharmacy restaurant in Notting Hill. After taking time off to travel through Australia, New Zealand and Asia, Owen took a Senior Sous Chef position at the Bildeston Crown public house in Suffolk, which gained 3 AA Rosettes during his time at the stove.

Accepting an offer to join the Gordon Ramsay Group, Owen join Michelin-starred maze in 2010 as Junior Sous Chef, later advancing to Senior Sous. In 2012, he was promoted to the position of Executive Sous Chef within the group, a varied role which required flexibility and dedication as he assisted at restaurants across London and also Gordon Ramsay Group’s international portfolio, including restaurants in Doha and the United States.

Owen has recently taken the stove as Head Chef at Gordon’s newest London restaurants – Maze Grill Park Walk and Maze Grill Royal Hospital Road. Taking inspiration from the grill rooms of Manhattan with a British approach, both are quintessential neighbourhood restaurants specialising in dry-aged British rare-breed, Wagyu and Prime USDA steaks alongside a signature selection of sushi and sashimi. As dual-site Head Chef, Owen oversees a strong team of chefs, ensures standardised practices in both restaurants and creates seasonal specials that showcase the beautiful produce that arrives into the kitchen daily.

Share
The key to this recipe is that there is no right or wrong with it, you can edit the amounts and items to your personal taste. We like to add...