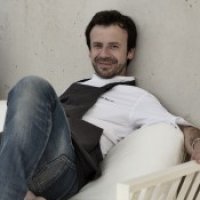 Nacho Manzano comes from Asturias, a region in the North of Spain which has one of the strongest cuisines in Spain. A montainuos region by the sea. Chef Manzano has access to a wealth of produce, from the best meat, game, vegetables and dairy products from the land to the finest fish and seafood from the sea. Working with local producers while using the most avant-garde technique chef Manzano has single-handedly evolved and modernised cuisine of Asturias. Most importantly, his talent, good nature and humility have earned him unanimous respect and appreciation from peers, food critics and foodies alike.

He is a creative chef, who began his profession at the early age of 15 at Casa Victor Restaurant in Gijon.

At the age of 22 he took on the responsibility of managing his own Restaurant, “Casa Marcial”, his parents’ former bar.

Casa Marcial is the gastronomic emblem of Asturias and one of the most significant restaurants in Spain included in the magazine Le Chef list of one of the Hundred Restaurants you have to eat at least once in your lifetime.

The Manzano family has a total of 3 Michelin Stars, Restaurant Casa Marcial has been awarded two (1999 and 2009) and Restaurant La Salgar one (2013) maintaining their stars continuously throughout the years.

Asturias is located on Spain´s northern coast, in the green belt of Spain. It´s beautiful region which is well known for its stunning mountains and coastline and its delicious gastronomy.

Casa Marcial is the flagship restaurant of International Chef Nacho Manzano and is located in the town of Arriondas at the foot of the Picos mountains of Asturias, North of Spain.

The simple exterior of this restaurant surrounded by picturesque countryside gives way to an attractive and rustic yet contemporary interior.

The impressive views to the mountains from the garden terrace, the charming and cozy interiors and the harmony of traditional and sophisticated dishes makes the visit to this restaurant an unforgettable experience.

Nacho Manzano is renowned for his specialty fish dishes and his modern interpretations of traditional Spanish cooking. He has travelled the world giving masterclasses in Spanish cuisine and represents Asturias at major international events.

Share
Sea Urchins Open the sea urchins with a scissors with a round cut at the top or mouth end (use gloves to protect your hands). Then remove the roe with...