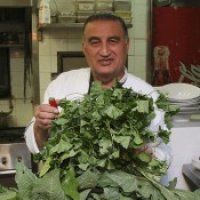 Our story begins in 1960, when a young boy named Moshe Basson celebrated the holiday of Tu Bishvat (the new year of the trees) by planting a small Eucalyptus plant in the yard of his parents’ home in Jerusalem. The years past, the Basson Family moved away, and the tree grew tall and strong. Under this very tree the First Eucalyptus restaurant was opened by the Basson Family.

Focusing on local and regional produce and cuisine, it drew instant attention, and among its patrons one would find Supreme Court judges, cabbies, University Professors, and local shop workers alike.

Moshe Basson, utilizing his schooling in agriculture and passion for studying ancient script, has incorporated into the restaurants kosher menu many dishes that are based on foods eaten for many centuries in this region.  In time, he became an authority on herbs and edible wild plants indigenous to this region, and their culinary uses.

As the Eucalyptus restaurant changed, grew and gained an even larger following of both Israelis and visiting tourists, Moshe continued to bring the message of local food to the world, winning several food competitions, was nominated for an honorary “Slow Food” prize, and continuing the family tradition by bringing his son, Ronny, into the management team of the restaurant.

Share
The Filling Fry the onion in a small amount of olive oil. Add the cubed chicken and spices. Stir until the chicken turns white. Adjust seasonings. Remove from heat. Cool. * For...