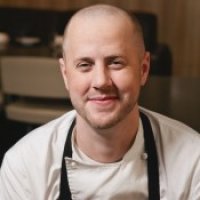 All posts by Matthew Kirkley

Born in Baltimore, Matthew Kirkley’s relationship with seafood began on the sun-bleached docks of Chesapeake Bay, where he often went crab fishing with his father. There he developed the reverence for pristine fish and shellfish, honestly treated, which still shapes his culinary point of view.

Kirkley entered the Culinary Institute of America in 2001 and began his career at Philadelphia’s Striped Bass. In 2004, he moved to Chicago to work at Seasons Restaurant in the Four Seasons Hotel and then NoMI in the Park Hyatt Hotel. He rose quickly through the culinary ranks and, in 2006, moved to Las Vegas and became sous chef at Restaurant Joël Robuchon. He returned to Chicago to open L2O, as well as Ria and Balsan in the Elysian Hotel (now the Waldorf Astoria Chicago), returning to L2O as chef de cuisine in early 2011. Later that year was promoted to executive chef and in early 2013, was made partner.

Kirkley’s exposure to some of the most dedicated practitioners of haute cuisine, including Yannick Alléno and the Roux brothers, has underscored his respect for fine ingredients and precise execution. As a result, his cuisine is opulent but never over-the-top. Kirkley’s touch is appealingly light, even playful, and the interplay of ingredients always harmonious. Unconcerned with culinary sleight-of-hand, Kirkley pays respect to culinary tradition by coaxing flavor from every ingredient, from the humblest to the most luxurious.

Chef Matthew Kirkley’s cuisine at L2O (pronounced el-two-oh) reflects a repertoire of new and traditional cooking methods2. Set within the historic Belden-Stratford Hotel adjacent to Lincoln Park, L2O’s modern dining room, designed by Dirk Denison Architects, is divided into a number of distinct spaces, presenting a sense of intimacy accented by the natural beauty of light and dark woods, frosted glass, leather and soft-colored stones. With an innovative menu, warm hospitality and an engaging atmosphere, L2O offers a fresh perspective on fine dining. Reservations can be made by calling 773-868-0002 or visiting www.L2Orestaurant.com.