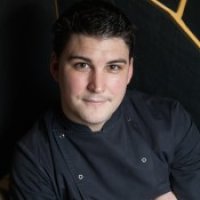 Prior to joining Novikov Jeff Tyler was at the Mandarin Oriental Marrakech where he worked as Chef de Cuisine. He was responsible for the creation and execution of Morocco’s premiere contemporary Japanese restaurant. Prior to this, he assisted on the operational side of the Mandarin Oriental Barcelona, working alongside the 5-times Michelin award winning chef Carmen Ruscalleda.

In 2004, having trained and cut his teeth in his native New Zealand, Tyler decided to make the move to Japan. There he became a protégé of Mr Toshkatsu Chiku-san, President of Chiku Ya Restaurant Group in Hamamatsu, working as the only westerner in a solely Japanese team and environment. During this time he enjoyed hands-on experience in a sashimi factory and trained in tempura, sushi and other traditional dishes.

Tyler then left Japan to hone his skills in such leading establishments as the deluxe Mangapapa Petit Hotel in New Zealand and Roka in London.

In early 2011, Jeff was invited back to Japan, spending a month at the Shizouka tuna markets, mastering the art of whole tuna cutting.

Like 2
Read More
Comment
Share
Preheat you grill to a medium heat. To make the gratin, mix everything together and adjust the salt to your taste, remember that the king crab is quite salty so...

Like 0
Read More
Comment
Share
Peel the Cucumber and cut lengthways in half. Take out all seeds with a spoon. Slice into 1 cm thick slices to make nice half-moon shapes. Mix the dark soy...

Like 0
Read More
Comment
Share
Combine the soy sauce, pepper, sugar, lemon juice, rice vinegar and olive oil and reserve in the refrigerator. You must blanch the langoustines in boiling water to begin. In a...

Like 0
Read More
Comment
Share
Mix the soy sauce and fresh yuzu juice together and put in the refrigerator Slice the hamachi/yellow tail very thinly, (belly part works best as its super fatty and tasty)...

Like 1
Read More
Comment
Share
Preheat Grill to 200 °C. Rub the green bell pepper with olive oil, salt and pepper. Grill it in the oven until the skin blisters. Cut the red onion into...