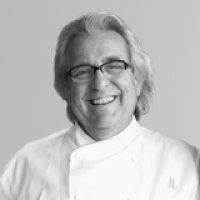 All posts by Jean Joho

Known the world over for having made an indelible mark on the culinary world with his exquisite personal cuisine, Chef Joho humbly entered the profession as a 6-year-old, peeling vegetables in his aunt’s restaurant kitchen. His rise to international success began on the 40th floor of the Chicago Stock Exchange with, what is now one of the world’s premier dining rooms, Everest. Today, his establishments across the country in Chicago (Everest and Paris Club), Boston (Brasserie Jo) and Las Vegas (Eiffel Tower Restaurant) set standards for dining and win accolades at every turn.

Most recently, Chef Joho opened the highly anticipated Paris Club, which serves approachable French fare in a casual, urban setting that appeals to a new generation of diners. Chef Joho also opened his kitchen to readers with the Eiffel Tower Cookbook, sharing 50 of his signature dishes and transporting the magic of Paris into kitchens of gourmet homes acorss the country.

Chef Joho’s formal training began as a 13-year-old apprentice for Paul Haeberlin of the acclaimed L’Auberge de L’Ill in Alsace, France, and continued in kitchens in France, Italy and Switzerland. By the age of 23, Joho was the sous chef at a Michelin three-star restaurant where he commanded a 35-person staff. It was while he was studying at the Hotel Restaurant School in Strasbourg that Joho immersed himself in the hotel and restaurant business, as well as the arts of pastry, cheese and wine.

Share
Please allow 5 days for preparation. Soak foie gras in half milk half water mixture for two hours. The liquid should cover the foie gras; this will help the foie...