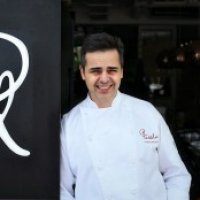 Eugenio Maiale carved out his reputation in Adelaide as the chef and owner of respected Grimaldis, Citrus and Auge restaurants. Arriving in Sydney eight years ago, Eugenio worked with some of Sydney’s best Italian chefs, including Stefano Manfredi. In 2007 Eugenio opened A Tavola, an authentic neighbourhood restaurant in Sydney’s Darlinghurst. A Tavola opened to widespread critical acclaim, which culminated in receiving a coveted chefs hat in its first year of operation.

In 2013 he has added a second outpost to the A Tavola family, with the opening of A Tavola Bondi in October. The restaurant is part of a recent development in the new Adina Complex on Bondi’s Hall Street, contributing to an exciting rejuvenation of Bondi’s dining scene.

The inspiration behind A Tavola – literally meaning “to the table” – derives from Eugenio Maiale’s upbringing. As a child, Maiale would play in the backyard of his Adelaide home while his parents slaved away in the kitchen, yelling out “A Tavola” when dinner was ready. On the kitchen table were consistently simple, honest and traditional style classical dishes.

Best as described as predominantly “abruzzese” (home to Eugenio’s family, north-east of Rome), A Tavola’s menu has a heavy emphasis on Eugenio’s dried and fresh hand crafted pasta, made the way his mother taught him. Prepared from scratch daily on A Tavola’s stunning ten-metre long marble table and cooked to order, the pasta is then served to guests each evening around the same table – a warm and inviting communal eating arrangement that pays homage to the Italian way of enjoying food with friends and family. The Bondi outpost has an added emphasis on beautiful seafood, with the kitchen team incorporating the new restaurant’s location into their signature cuisine.

Diners at both restaurants will taste honest food that is prepared with attention to detail and love – a difference that has seen A Tavola Bondi & Darlinghurst singled out as some of Sydney’s finest Italian eating-houses.

Share
Heat the butter and oil in a deep pan, add the vegetables and fry until they have softened. Add the pancetta, nut meg, cloves, garlic, bay leaves and minced meats....