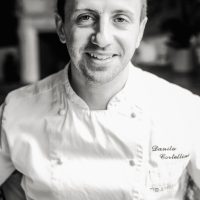 All posts by Danilo Cortellini

Originally from Abruzzo, a small region of Italy that is rich in culinary tradition, Danilo is the Head Chef of the Italian Embassy in London since 2012.
Before arriving at the Embassy, Danilo trained at Michelin-star level both in Italy, at restaurant San Domenico in Imola and Perbellini near Verona, then in London with three Michelin-starred Alain Ducasse at The Dorchester.
More recently, Danilo took part in MasterChef: The Professionals, fighting his way to the top and ranking as one of the finalists, and appeared on BBC1’s live cooking show Saturday Kitchen.
After publishing his first cookbook called '4 Grosvenor Square, The menu of the Italian Embassy in London' Danilo has returned to his roots and is on a mission to share with the British public as many simple & traditional Italian recipes, made with wholesome ingredients, as he can!

Share
Cooking Time: 40
What is beyond risotto? I know it is a weird question to ask, but as a cook have you asked yourself what else can be prepared with great quality Italian...

Like 1
Read More
Comment
Share
A few weeks ago I promised you this amazing crispy egg with asparagus recipe, well I am a man of my word. Hope you like it! Simply irresistible Serves: 4...

Like 30
Read More
Comment
Share
Have you ever been to Emilia Romagna? It is a beautiful wide region that stretch from the far west of Italy (Emilia) until the glorious sand coast of the Adriatic...