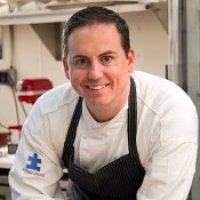 Born and raised in the Garden State, Chef Anthony Bucco credits his passion for food to the time spent in his grandfather’s garden and grandmother’s kitchen as a child.  While his menu philosophy reflects seasonality and advanced technique, his true passion is preserving the balance between the refined and rustic.  As the new Executive Chef of Restaurant Latour, Bucco relies on the rhythm of the seasons and local producers and foragers in creating menus that interplay with the resort’s unparalleled 135,000 bottle wine cellar.  In his role leading the kitchen of Crystal Tavern, he will introduce a refined gastropub menu highlighting local artisanal ingredients.

With over 15 years’ experience in some of the best kitchens on both sides of the Hudson, Bucco continues to evolve his culinary vision as he takes the helm at Restaurant Latour.  A graduate of the New York Restaurant School, he has honed his skills working in top restaurants in New York and New Jersey, always with an eye for local ingredients, farmers, sustainable agriculture and bold, natural and honest flavors.

Chef Bucco’s resume includes leading the kitchens of the Ryland Inn, Whitehouse Station, NJ, Uproot in Warren, NJ, Provence in NYC, and Stage Left in New Brunswick, NJ, in addition to a recent role overseeing Jonathan Waxman’s multiple restaurants in the US and Canada.

In 2012, Anthony was instrumental in reopening the storied Ryland Inn, garnering the first four star review New Jersey Monthly had given in a nearly a decade, with Eric Levin noting Bucco was “a gifted chef whose time has come.”  Among other accolades, Bucco has received The New York Times’ highest rating (Excellent), AAA’s coveted Four Diamond Award, and four stars from The Star-Ledger for his work at each of the following restaurants: Stage Left, Uproot and the Ryland Inn.

Born and raised in the Garden State, Chef Anthony Bucco has guided the kitchens at such acclaimed New Jersey restaurants as The Ryland Inn, Uproot and Stage Left.  At Restaurant Latour, he marries modern techniques with the freshest seasonal ingredients from local purveyors, foragers and the resort’s own farm to create a truly unique dining experience.  Bucco’s menus also interplay with wines from the resort’s incomparable Wine Spectator Grand Award-winning 135,000 bottle wine cellar.

Restaurant Latour offers two menu options: a five course “Anthology” prix-fixe with multiple choices in each category ($115) or a seven course Chef’s Tasting menu ($145).  The Anthology menu allows diners to construct their own meal with one selection from each category – vegetable-focused Harvest, Aquatic, meat-centric Grazing, Cheese and Dessert.  The tasting menu features a progression of menu items highlighting the best ingredients available in season.  Each menu can be paired with selections from the cellar, with 35 wines available by the glass offering the sommeliers the flexibility to create unique pairings for each guest’s menu ($55 for 5 courses, $65 for 7 courses).

Restaurant Latour sources from the country’s top foragers known for their ability to uncover rare and hyper-seasonal ingredients, often available only for a few short days or weeks.  Crystal Springs has fostered relationships with a diverse group of sources across the region to supply the kitchen and bar with top quality ingredients at the peak of freshness and ripeness.  Locally, Sarah Berman and Corey Finck of The Armstrong Farm in Wantage, NJ produce edible plants and heirloom vegetables on their organic six acre farm in addition to foraging from the property and surroundings.

Restaurant Latour and its unrivaled Wine Cellar have held Wine Spectator’s highest accolade, the Grand Award, since 2006.  The wine list has also been awarded three stars (the highest rating) from The World of Fine Wine’s “World’s Best Wine Lists” in 2014 and 2015, was named one of “America’s 100 Best Wine Restaurants” by Wine Enthusiast in 2014 and 2015.  Crystal Spring’s cellar is home to one of the largest fine wine collections in the world with over 135,000 bottles, featuring 6,000 labels and vintages going back to 1863.  Overseen by Wine Director Robby Younes and sommelier Susanne Lerescu, this unique collection includes verticals of all the great chateaus of Bordeaux and Burgundy, including many prized vintages and rare bottles such as more than 100 vintages of Chateau Latour (from 1863).  The entire Restaurant Latour wine list has been converted to an iPad format and is also available as two printed volumes.

In 2014, Restaurant Latour garnered a rating of “Excellent” from The New York Times, received four stars from the Newark Star-Ledger.  It has retained its place on New Jersey Monthly’s “The 25 Best Restaurants” list since 2013.

Restaurant Latour is located at 1 Wild Turkey Way, Hamburg, NJ in the Clubhouse at Crystal Springs Resort.  The restaurant serves dinner Thursday – Sunday from 5pm till 10pm.  On Sundays, dinner guests receive a guided tour of the award-winning Wine Cellar along with a glass of wine and passed hors d’oeuvres.  Dress code: no jeans or sports footwear.  Reservations are required and can be made by calling 855-977-6473 ext. 3 or on OpenTable.com.

Share
Carrot/Apple Puree Pre-heat a sauce pot over medium heat, add the oil, then the onion, apple, carrot and thyme. Sweat until vegetables are soft, add water and bring to a...