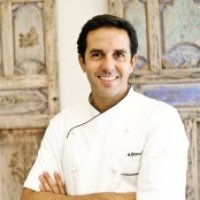 All posts by Alfonso Alés

Hailing from the sunny town of Seville, in the south of Spain, Alfonso Alés has worked in some of the most renowned Relais-Chateaux hotels and Michelin star restaurants across Europe, before settling his knives as Executive Chef at Jonah’s Restaurant & Boutique Hotel.

Having adopted the techniques and influences of some of the world’s most respected chefs, Alfonso has developed a personal culinary style that is steeped in the love of simplicity, purity of taste, and respect for the seasonality and sustainability of produce. Inspired by his travels around the world as well as his Mediterranean heritage, Alfonso is excited to tackle his next culinary challenge – taking the helm as Executive Chef at Jonah’s Restaurant & Boutique Hotel.

Along with his skilled kitchen team, he will introduce a new menu drawing on southern European influences for guests to enjoy while taking in the unsurpassable views of the Pacific Ocean and Whale Beach for which Jonah’s is renowned.

Share
Scallops: 3 pcs per person Cooked on one side until golden with olive oil and butter to baste Then let to rest 2 min. on warm place before plating Jerusalem...