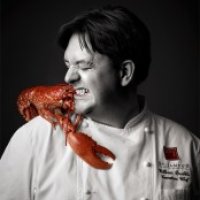 All posts by William Drabble

William Drabble, one of the UK’s most celebrated chefs, is head chef of the Michelin-starred Seven Park Place at St James’s Hotel and Club, London.

Inspired at a young age by the Norfolk countryside and his grandmother’s stories of cooking in the big houses of Yorkshire during her days of service, Drabble embarked on his career as an unpaid kitchen porter at the tender age of 14. After catering school, he worked in the seaside town of Eastbourne, where the leisurely pace of life gave him the opportunity to fully immerse himself in all things gourmet.

Following tours of duty at some of the UK’s most influential Michelin-starred hotels and restaurants including The Capital Hotel and Chez Nico, Drabble took up the role of sous chef to Tom Aikens at his former restaurant, the two Michelin-starred Pied à Terre. From there, he went on to become head chef at Michael Nook’s Country House Hotel in Grasmere earning a Michelin star within four months, at the age of only 26.

Upon Gordon Ramsay’s departure, he settled in at London’s Aubergine, again winning a Michelin star in 1999, which he maintained for ten years until leaving in 2009.

Already working at St James’s Hotel and Club as Food and Beverage Manager was former colleague, Christophe Thuilot of The Capital Hotel, and together they created the formidable team that, in January 2011, just over a year after joining the Hotel, enabled Drabble and Seven Park Place to be awarded a much coveted Michelin star and four AA Rosettes.

At Seven Park Place, Drabble has created his own unique menu, influenced by classic French cuisine but made using the best local, seasonal British ingredients, which are at the heart of his sublime cooking.

Drabble, a confident yet humble chef, enjoys life in the kitchen with his talented team creating fresh new seasonal dishes and menus. Depending on the season, a personal favourite of his is either a rustic Cassoulet, Cote de Beouf on a BBQ or grilled langoustines.

During his spare time, Drabble enjoys spending quality time with his family, walking, reading, and is an unashamedly big Liverpool FC fan.

A stone’s throw from the hustle and bustle of Piccadilly and the boutiques of Mayfair is Seven Park Place, the deliciously small, but perfectly formed 26-cover Michelin-starred restaurant by William Drabble.

Located in the St James’s Hotel & Club, a proud member of Small Luxury Hotels of the World, Seven Park Place was awarded a Michelin star and four AA Rosettes just a year after opening and it’s easy to see why.

William Drabble has created a menu that, whilst influenced by his classical French training, is packed full of British seasonal ingredients. His approach is unfussy allowing the meticulously sourced local ingredients to speak for themselves. Signature à la carte dishes include poached native lobster tail with cauliflower purée and lobster butter sauce; best end of Lune Valley lamb with confit potatoes, caramelised onion and thyme jus; marinated hand-dived scallops with Dorset crab and blood orange; and braised stuffed oxtail, celeriac mash, wild mushrooms and bone marrow. For a truly memorable dining experience, opt for the outstanding six-course degustation menu at £69 (£123 with paired wines, whilst an exceptional value-for-money lunch menu offers two courses for £24.50 and three at £29.50).

An elegant space, with a clear nod to the ‘Golden Age’ of 1920s glamour, the intimate jewel box-like dining room exudes a sense of occasion, touched with modern comfort and a relaxed ambience. The work of British designers is evident throughout with handmade crystal lighting from Vaughan and soft furnishings by William Yeoward, Osborne & Little and Designers Guild. Neisha Crosland wraps the walls with glamorous print.

The restaurant’s head sommelier, Marco Feraldi, is on hand to guide diners through the impressive 225-strong list, which includes a host of unique and rare vintages. Look out for the restaurant’s regular food and wine pairing dinners, producer evenings and wine and cheese masterclasses that take place throughout the year with William and Marco.

For a private affair, William Drabble’s cuisine can be enjoyed in one of the gorgeous private dining rooms. From the Wellington Boardroom to the stunning Mayfair suite, the rooms are ideal for a whole host of occasions from business lunches to birthday dinners, wedding breakfasts and family celebrations.

Share
To prepare the lobster, place it into the freezer for half an hour. This will render them insensate. In the meantime put a big pan of water on to blanch...