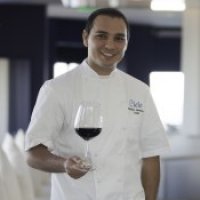 All posts by Nader Jaouhar

Chef de Cuisine Nader Jaouhar oversees all culinary preparations at Cielo, the coastal Mediterranean restaurant perched atop the Tower at Boca Raton Resort & Club with panoramic views of the Atlantic Ocean and Intracoastal Waterway. With his French training and eastern Mediterranean background, he has the ideal credentials to create the flavorful cuisine at this inviting showcase under the direction of Boston restaurateur Michela Larson.

Chef Jaouhar joined Cielo in 2007 as Sous Chef. His prior experience in South Florida includes three years as Sous Chef with Pascal Oudin of Pascal’s on Ponce in Coral Gables, as well as positions with Bistro in Lighthouse Point , Sunfish Grill in Pompano Beach , and The Ritz-Carlton Fort Lauderdale . He attended the Art Institute of Fort Lauderdale and for two years served as captain of the culinary team. He is now a member of the Institute’s Culinary Advisory Committee.

A native of Senegal, Chef Jaouhar studied pastry in Paris and worked in several restaurants in France before moving to the U.S. When not in the kitchen, he enjoys spending time with his wife and two young sons.

Share
Cooking Time: 50 min
This bistro steak recipe is for four people and has three components: a) the steak, b) the salsa verde and c) the polenta fries. Bistro steaks, most commonly knows as...