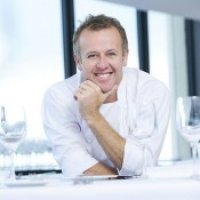 All posts by Michael Moore

With a career in food spanning almost three decades, Michael Moore is no ordinary chef, better described as a global entrepreneur.

With a passion for nutrition and a fervent interest in the science behind food, the popular television chef, food consultant and author is able to make high-end food preparation both accessible to the cook at home and desired by the discerning restaurant patron.

Moore is renowned across three continents for his work as a chef as well as his food consultancy, cookbooks and personal appearances. He has cooked for some of the world’s top celebrities from Madonna to Elton John, Sean Connery and Mick Jagger. Shows such as Fresh, Junior MasterChef, Biggest Loser, Domestic Blitz and Morning’s with Kerrie-Anne have made him a household name here in Australia and his international profile continues to grow with appearances on the NBC Today Show, reaching an audience of 29 million viewers and New York’s Morning News to his name.

As the owner of Sydney’s new O Bar and Dining, located atop the famous Australia Square building, as well as the popular Reuben & Moore in the Westfield Sydney complex, Michael is carving a global career for himself, one that shows no signs of slowing to a simmer any time soon.

Two years ago personal circumstances changed the trajectory of his career. While out to lunch with family one day in late 2009, Michael, diagnosed as a diabetic ten years prior, suffered a major stroke that nearly claimed his life. Permanently changing his outlook on healthy eating, this episode sharpened his determination to educate others on the importance of correct nutrition, particularly for fellow diabetics.

Raised in England, Michael developed a love of cooking at an early age, constantly winning his school’s cooking competitions. It was while studying classical cookery at college that he developed his keen interest in the scientific aspects of food and nutrition that have come to set him apart from his peers today. After completing his studies in the early 1980s, he worked in various London dining establishments before deciding he wanted to travel to broaden his experience. Choosing to experience the ‘new world cuisine’ of Australia over the ‘classical cuisine’ of France, he moved to Sydney for a year before travelling through Asia to experience the rich cuisines of the region.

Returning to Australia twelve months later in 1988, Michael was offered his first head chef position at the 2-hatted restaurant Craigend at just 23 years old. Three years later Michael became the youngest hotel Executive Chef in Australia, taking the role at the Hotel Nikko in Darling Harbour. On a trip home to the UK to get married four years later, Michael was introduced to Sir Terence Conran who was instantly impressed with his dynamism and passion. Soon after, Sir Terence offered him the position of Executive Chef of The Bluebird Gastrodome in London’s trendy Chelsea area. Michael lead a team of 120 chefs and was responsible for building this $30million project from the ground up, from consulting on the design and build of the kitchens and dining space to selecting each of the 25,000 products sold in The Food Store.

Wanting to begin a family in a city with a higher quality of life, Michael and his wife Angela returned to Sydney in 1998 where he was appointed Consulting Director of Food at the Sydney Opera House. Contemporising the menu and transforming the culture of the various dining destinations housed within the Sydney icon, Michael made each more accessible to the broader local Sydney market and visitors to the harbour city. His total redesign of Bennelong proved one of the biggest shake-ups of the Sydney restaurant scene for some time, opening up what had been an ultra exclusive offering to bring the party to the Opera House.

A year later, Michael decided to take the leap into owning his own establishment, purchasing the then-struggling Pruniers in Woollahra. Under his direction, the restaurant became an overnight success and he soon purchased Darlinghurst eatery Bonne Femme, both restaurants receiving chef’s hats from the Sydney Morning Herald’s Good Food Guide.

By 2002, Michael’s food consultancy was rapidly expanding and so he left the restaurant business to focus on this solely, consulting to clients such as QANTAS Airways, Sumo Salad, Sanitarium and Singapore Airlines. Three years later, Accor asked him to revamp the Summit restaurant, his unique touch restoring its image as one of Sydney’s finest food destinations. During this period Moore also acted as Food and Beverage consultant for Sofitel Hotels across Australia and the Pacific.

In 2007, the opportunity to purchase the Summit presented itself and Michael became a restaurant owner once again, taking ownership of one of the most established restaurants in the city.

In 2010, Michael released his first book entitled Moore to Food, a comprehensive entertaining guide transposed for the home cook as well as being Michael’s own guide to perfecting the ultimate entertaining experience in the home. Later that year, he opened New York-style Reuben & Moore sandwich bar & grill in the prestigious food court of the $1.2billion Westfield Sydney complex.

In 2011, Michael published his second book, Blood Sugar, a beautifully presented collection of recipes that demonstrate that keeping sugar levels under control need not mean going without fine food. In promoting the book and the inspiration behind it, Michael has sought to educate audiences about the importance of taking interest in what you are eating and ensuring you’re not setting yourself up for potential health concerns in the future. The important messages behind this have seen him promote the book internationally. He officially launched Blood Sugar in the US at an event at the Australian Consul General in New York attended by guests from the UN and national media. The global campaign saw Michael reaching 21million listeners on Martha Stewart’s radio show, present a live demonstration in Bloomingdales, appearing on buses across London as part of a unique advertising campaign and even gifting the queen of television Oprah Winfrey and First Lady Michelle Obama with a copies of the book.

Michael Moore has become the Culinary Ambassador for California promoting the state’s diverse food scene. He was the Star Chef and Key Note Speaker at the International Food Bloggers Conference Dinner in LA last year, speaking to 300 of the top US Food Bloggers and digital community. At home in Australia, he is a celebrity ambassador for the National Breast Cancer Foundation and is the chef for their Global Illumination event that sees local landmarks and buildings lit up to put the spotlight on breast cancer.

In September 2012, Michael closed The Summit, reopening the new O Bar and Dining in the space as a reflection of the changing nature and demands of diners. With two new bar areas and a menu underpinned by the Blood Sugar philosophy, the venue is set to give Sydney a skyline venue to rival the best in New York, Chicago or Hong Kong.

With his profile and brand continuing to build internationally as he spreads his message about nutrition, this global entrepreneur is set to continue to reinvent the dining experience on both sides of the world.

Share
In a medium-sized pot with a lid, place the cooked quinoa, coconut milk and agave syrup and bring to a simmer. Simmer for 5 minutes until all the liquid has...