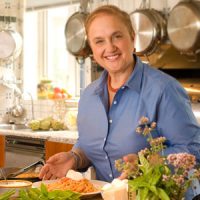 In 2014, she launched her fifth television series, Lidia’s Kitchen. She owns several Italian restaurants in the U.S. in partnership with her daughter Tanya Bastianich Manuali and her son, Joe Bastianich, including Felidia (founded with her ex-husband, Felice), Del Posto, and Becco in Manhattan; Lidia’s Pittsburgh in Pittsburgh; and Lidia’s Kansas City in Kansas City, Missouri.

Share
This amazing recipe is provided by Lidia Matticchio Bastianich and was published in her amazing cook book Lidia’s Mastering the Art of Italian Cuisine: Everything You Need to Know to...