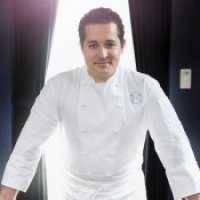 A native New Yorker, James started his culinary career as a summer apprentice at Bouley when he was fifteen years old.

After taking classes at the Le Cordon Bleu in London and Paris and graduating from Johnson and Wales, James moved back to New York where he spent time in the kitchens of Babbo, Jean-Georges, and Gordon Ramsay.

James joined the team at Eleven Madison Park as a line cook in the spring of 2007 and was quickly promoted to sous chef. In 2011, James was chosen to represent the United States at the international finals of the Bocuse D’Or in Lyon, France. After a full year of training for this culinary competition, he placed tenth in the world.

Upon returning to New York, James was named chef de cuisine of Eleven Madison Park and during his time there, the restaurant received numerous accolades including four stars from the New York Times, three Michelin stars, and a coveted spot on the San Pellegrino list of the World’s 50 Best Restaurants. James was promoted to Executive Chef of the NoMad in the Fall of 2013.

Share
Lobster Bring a large pot of water to a rolling boil and prepare an ice bath. Place the lobsters in a large heatproof container and pour enough of the boiling...