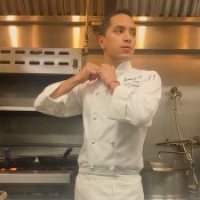 “Inspired to cook by his Peruvian Heritage, Ernesto acquired a love of cooking at 10 years old and dreamed of working with great culinary professionals and owning a catering company.  Chef Ernesto’s passion for cooking started while he was traveling for the professional tennis championships ITF , and the desire to have meals that where healthy, delicious and well presented.

After finishing his culinary education in Los Angeles, CA. Ernesto continued his education achieving a bachelor’s degree in hospitality management.

Chef Ernesto Moreno’s reputation and resume in the bustling culinary world of Los Angeles is only superseded by the age at which he’s accomplished these feats.  At 26 years old he’s already spent over half of the last decade working as demi chef de partie working directly under famous British Chef  Ashley James at the Four Seasons Beverly Hills.

Since, he has spearheaded a massively successful multi-cultural menu overhaul as the Executive Chef at NM Cafe in Neiman Marcus, opened his own Peruvian fusion food truck, and catered such events as the Mercedes Benz Cup, The Grammys, official Oscar after parties, and the Directors Guild Awards.

His vision of meshing both South American and European cuisine with the impeccable plating and presentation makes his, a singular and impactful new voice in the culinary world.  “

Share
This is a brand new creation by Chef Ernesto Moreno, Executive Chef at Pinterest. How to Prepare the Spiced Spaghetti Squash: To prepare the spaghetti squash, preheat the oven to...

Like 0
Read More
Comment
Share
Fish Place the cut fish into a bowl and combine the lemon, lime, aji amarillo, garlic and fish mixture and let it marinate. Add seasonsing as desired. Corn Boil the...