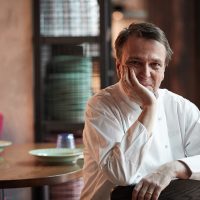 All posts by David Thompson

Multi-award-winning chef and author David Thompson is considered by many to be the world’s leading authority on Thai cuisine. The celebrated restaurateur launched the first of his many eateries in Sydney in the early 1990s in an effort to share Thai flavours with the rest of the world. In the 2000s David expanded into Great Britain, welcoming the adored Naim in London in 2001, an eatery so respected it was awarded a Michelin star within its first 6 months of opening. In time he returned to Australia to launch the first of his (now three) Long Chim restaurants, which embraces a simply food philosophy of fare that is fast, full-flavoured and affordable, and heavily inspired by the marketplaces of Bangkok. “The streets of Bangkok are the part of Thai culture I love the most. You’ll find most Thais prefer to eat in the markets and on the streets – and it’s where you’ll find me too,” David explains of his ongoing love affair with Thai cuisine.

Share
Cooking Time: 25 min
Originating from ethnic Lao people, this spicy salad is a delicious appetizer. It is eaten throughout South-Asia and you’ll find it in a few different forms in Thailand, Laos, Vietnam...