All About Sea Urchins (Uni) – Taste, Types, How to Cook 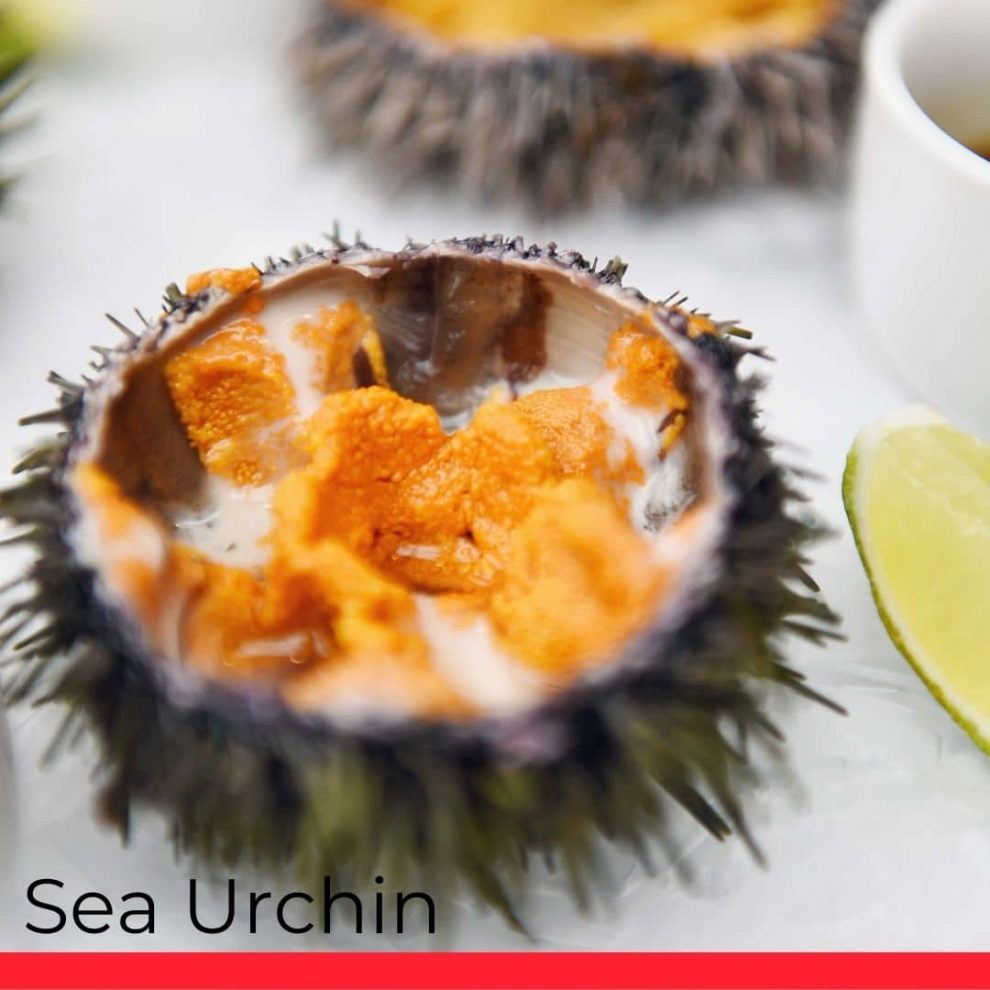 Sea urchin is loved and hated across the world. It has a strong ocean smell and is creamy and rich while being buttery in texture. Its richness and unique flavor makes sea urchin an acquired taste. There are nearly a thousand different species of sea urchin, with only a few being edible, that can be found in all of the world’s oceans. But they are very difficult to harvest, especially since there are so few that can be eaten.

Sea urchin (often called “uni” in Japanese) are echinoderms with spiny spherical shells encasing five gonads (reproductive glands), which are the edible part. The shape of them resembles a tongue and they have a mustard-like color and consistency like a firm custard.

There are two main types of sea urchin: Murasaki and Bafun.

Murasaki uni is the most common type available in Japan. It comes from a dark purple (“Murasaki” in Japanese, hence the name) sea urchin with long pointed spines. Inside, it is a mustard-like yellow color. The flavor and aroma are not overly pungent but delicately mild and sweet, which suits sushi and sashimi best.

Bafun uni can be found in deep ocean territory. This results in a smaller and more pungent sea urchin. They have a bolder taste and are full of umami, with a more of orange color (they are often referred to as red sea urchin). Bafun uni can be eaten raw in sushi or in sauces and other cooked dishes.

Both of these sea urchins are classified differently when they are caught in Hokkaido, in Japan. Kita-Murasaki Uni has a more delicate texture and sweet flavor than regular murasaki uni. Furthermore, Ezo-bafun uni has a sweet aroma and a rich creaminess like no other. Uni in Japan is best enjoyed from early summer to the end of August. During this period, the gonads grow in size to prepare for the mating season, which is also when they are most flavorful. Shakotan Peninsula, Yoichi town, and Rishiri Island are some of the main spots to enjoy Japanese uni.

Aside from Japan, the west coast of the US and Chile are popular spots to find sea urchin.

Sea urchin is an extremely delicate ingredient that takes great care. The natural sweetness and creaminess are best served as they come – raw. It does not benefit from being cooked as it easily disintegrates and loses its sweetness.

Raw sea urchin is the best way to enjoy the prized produce. After removing from the shell, it is lightly washed in water to remove any grit. Alongside sashimi (slices of raw fish), sea urchin is also enjoyed simply by dipping in some soy sauce and wasabi.

There are many different types of sushi. However “Uni Gunkan Maki” is the most common. Gunkan refers to the shape of the sushi, resembling an elongated ship. Sushi rice, lightly seasoned with vinegar, is topped with sea urchin and wrapped in nori (seaweed).

The texture is delicate, smooth, and creamy. It melts in the mouth, mingling the sweet and salty flavors of the sea. The maki is then either dipped in or topped with soy sauce, along with wasabi and pickled ginger on the side.

Donburi is a rice dish that is usually topped with seafood or meat. Similar to sushi, a bed of rice is lightly flavored with vinegar and then topped with seaweed and sea urchin. A nob of wasabi usually tops the dish and the consumer can pour the amount of soy sauce they like.

Whereas sushi uses sea urchin sparingly, a donburi is topped full of the ocean delicacy. The donburi can be topped with just sea urchin but it is also commonly accompanied by raw scallops or salmon roe.

This is a traditional Japanese dish consisting of an egg custard steamed with a dashi broth. The dashi imparts an umami flavor while having a delicate custard-like texture. Uni is sometimes added as a topping, complementing the fishy dashi broth and the creaminess of the dish.

Combing Italian and Japanese cuisines, pasta is a unique way of enjoying sea urchin. A garlic cream sauce and sea urchin are mixed with the pasta. The sweetness and creaminess perfectly wrap around each bit of pasta, which is usually topped with more raw sea urchin. It is often topped with nori for a further umami punch.

Sprinkling raw sea urchin with salt helps to concentrate its natural sweetness. Left to brine in the fridge for 30 minutes, the shape tightens up and the exterior becomes glossy. This type of sea urchin is usually stored in jars and can be eaten with rice or in sushi!

Growing up with a Japanese mother, Andy has extensive knowledge of Japanese culture, life and food. Originally from England, Andy started to train to be a chef after graduating university and moved to Japan to start his culinary journey. With his aim to run his own restaurant, he studied under Michelin star chef Namae Shinobu and Akihiro Nagao. He is now studying how to roast coffee in Northern Japan.