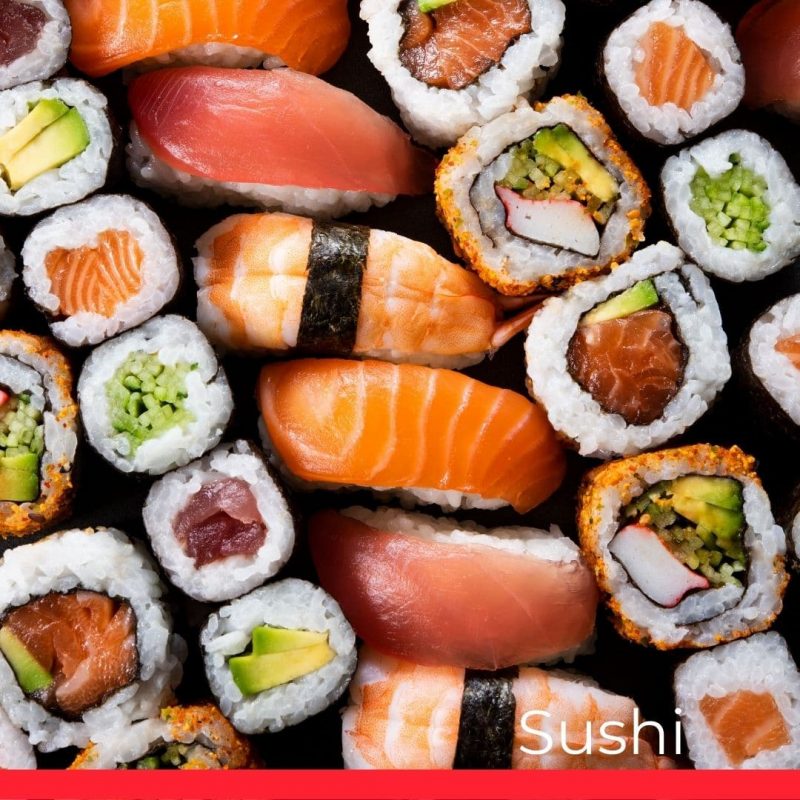 Sushi is one of the most iconic dishes of Japan and has grown in popularity worldwide. With over 29 million tags, it is the 5th most tagged food on Instagram, which speaks volume about its huge popularity.

The standard nigiri sushi and makizushi can be found almost anywhere, but there are many other types of sushi that people may not be aware of. Sushi ranges from high-end to extremely affordable and is also surprisingly easy to make at home.

Nigiri is the most iconic image of sushi. It originated in the early 1800s in the Kanto Region and was named Edomae sushi: Edo refers to Tokyo’s previous name, and mae translates as in front of. The name is thought to allude to the harvest of fish around the Tokyo Bay area. During that time, food needed to be preserved as there was no refrigeration. The fish was marinated in a soy sauce, salt, and vinegar mixture. Nowadays, however, fish is eaten raw.

There are a few ingredients comprising nigiri sushi and each is as important as the other. First is the rice (known as sumeshi), which sushi chefs can take years to master. The rice is washed, drained, soaked, cooked, and then mixed with vinegar, sugar, and salt.

The perfect combination and balance of these components is extremely difficult—which is why it takes so long to get it right! The most important aspect is the texture of the rice—how it balances with the fish and how it holds. This may seem simple, but it is one of the most challenging aspects of sushi.

Next is the topping or neta, which can range from vegetables to fish. While seafood is more common, new toppings such as beef can be found in many restaurants and conveyor belt sushi shops. The most popular toppings include salmon, tuna, and prawns. However, in top-quality restaurants, you can find a host of other ingredients. Sea urchin, abalone, and even cod sperm are widely available throughout Japan.

The next component is wasabi, which is a sort of spicy green paste made from the rhizome of the Wasabia japonica plant. Freshly grated, wasabi is bright and pungent, with a slight ting of heat. It is not too overpowering so it compliments raw fish perfectly. However, at cheaper places, you may not actually be eating real wasabi! Here, horseradish and mustard may be included, which is why it is sometimes a lot spicier.

Nigiri sushi can be eaten with chopsticks or fingers. At higher-end restaurants, the sushi is placed in front of you one at a time and you are encouraged to eat it with your fingers. An accompaniment of gari (pickled ginger) is also offered, which, again, should be eaten with your fingers. Finally, the sushi should be dipped in soy sauce, on the topping side not the rice—the soy sauce will ruin the texture of the rice which will start falling apart!

Makizushi is the next most commonly available sushi. The rice and ingredients are rolled in nori (seaweed) and cut into small pieces. Hosomaki (thin roll) is comprised of just one ingredient, such as tuna or cucumber. Futomaki (fat roll) is made with a variety of ingredients, such as egg, prawns, and salmon. These are not as common in restaurants but can be found in supermarkets.

Another variation is uramaki, which is an inside-out version of the typical makizushi. It is thought that it began in California in the 1960s, where the California roll was invented. The rice is laid out on a bamboo roll and then topped with a sheet of seaweed. Next, the topping is placed in the middle and then rolled. California rolls contain cucumber, crab, and avocado, which is then coated in sesame seeds or tobiko roe.

Ingredients such as avocado aren’t too common in Japanese cuisine and are mostly be found elsewhere around the world.

Gunkan is another type of wrapped sushi, similar to makizushi, where a ball of rice is wrapped in nori. At the top, there is just enough space to put in the toppings. The name translates as battleship, named due to its shape, which resembles a tiny ship.

The most popular toppings are sea urchin, salmon roe, or tuna. Tuna gunkan maki is usually made from the fish’s fatty belly or scraped from along the bones, the part that can’t be used for nigiri sushi. There are also vegetarian options available such as cucumber or even corn.

Temakizushi is sushi in the shape of an ice cream cone. The rice and ingredients are wrapped in a square sheet of nori into a conical shape. Whereas the previous sushis are strict on form and shape, temakizushi is more casual, making it great for sushi parties at home!

A wide variety of ingredients can be used, making it great for using up any leftovers you may have in the fridge. It is usually dipped in soy sauce and wasabi and eaten with your fingers.

The last most common sushi is Inzarizushi, which is made from sushi rice stuffed inside a deep-fried tofu pouch, called Inari age. The tofu is simmered in a sweet and salty dashi-broth, adding fantastic umami and depth of flavor. They are sweet and slightly salty and are fantastic as a small snack or even as the final part of your sushi meal. Sometimes other ingredients are added, such as shiso or salmon roe.

Inarizushi is dedicated to the Inari deity, known for protecting crops. The Japanese used to worship this deity by offering aburaage (deep-fried tofu) to the fox statues on the grounds of the shrine. The foxes are messengers of the Inari deity and people believed they like aburaage. Over time, people added harvested rice to the aburaage as a thank you to the Inari god for a successful harvest.

The next three sushis are commonly found in Japan but not so much worldwide.

Chirashizushi is similar to a deconstructed makizushi. It is a stunning, brightly colored dish that is usually eaten on special occasions.

A mix of ingredients such as salmon roe, egg, and cucumber are all scattered on top of rice. The result is a stunning array of colors that looks something like a festival. Chirashizushi is so easy to make at home as there are no specific techniques used.

The sushi can be eaten as it is, or a soy sauce can be poured on top.

Hakozushi is a traditional take on the regular nigiri sushi. It is compressed in a wooden box (oshibako), creating a compact, beautifully sculptured piece of sushi. The bottom of the oshibako (sushi mold) is lined with the desired topping and then filled with sushi rice.

Finally, it is pressed with the lid and cut into bite-size pieces. Compared to the regular hand-pressed nigiri sushi, the ingredients used are pre-seasoned so it can be eaten as it is. Boiled and cured fish is used instead of raw so that they can be stored and eaten later.

Yoshino Torazo developed the famous hakozushi in the 19th century.

To preserve the longevity of the sushi, Torazo decided to cure the fish and press it into a box shape to make it more compact.

A variety of seafood can be used, from mackerel to eel, which is all perfectly square-shaped and delicious. The ingredients are flavored as they are prepared so there is no need for soy sauce.

Nowadays, hakozushi is found in department stores and can be bought as a gift or souvenir. They come in small wooden boxes and are a colorful array of ingredients arranged like a jigsaw. It originated in Osaka, where there are restaurants selling hakozushi, but it is not as widely available as nigiri sushi.

Another type of pressed sushi is kakinoha-zushi, which comes from Nara. Kakinoha translates as leaves of persimmon and dates back to the Edo period. Before refrigeration, fresh seafood was often wrapped in persimmon leaves to preserve it.

The antibacterial compounds of the leaves helped prevent the fish from spoiling and their delicate and sweet aroma imparts a lovely flavor. Similar to hakozushi, it is commonly bought as a gift or souvenir, so can be typically found in department stores or specialized shops.

There are so many different types of sushi, with different styles depending on where you eat them. Sushi chefs take years to perfect their craft but sushi can also be a casual dish, eaten from a conveyor belt or prepared in your own home!

There are no strict rules about topping ingredients, so feel free to use anything you like! If you feel like eating out, conveyor belt restaurants are widely available and offer a wide selection of sushi with all different types of toppings.

Growing up with a Japanese mother, Andy has extensive knowledge of Japanese culture, life and food. Originally from England, Andy started to train to be a chef after graduating university and moved to Japan to start his culinary journey. With his aim to run his own restaurant, he studied under Michelin star chef Namae Shinobu and Akihiro Nagao. He is now studying how to roast coffee in Northern Japan.