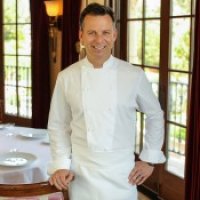 In his role as director and executive chef of Addison Restaurant, William Bradley conveys his persona and culinary prowess through a simple, yet inspired menu grounded by taste and technique. Since 2006, his contemporary French cuisine crafted with pristine California ingredients from local farms, has led to global recognition for him and the restaurant. Current dishes include: Coddled Farm Egg with morels, white asparagus, parmesan fondue; Calotte de Beouf with escargot à la dijonaise and mushroom gratin; and Vacherin a La Framboise.

Bradley, a four-time James Beard Award nominee, was named the U-T Chef of the Year by The San Diego Union Tribune in 2014, won Robb Report’s Culinary Masters Competition that same year, and has served on the Council for Bocuse d’Or USA since 2013, among other accolades. He is also one of only 160 chefs on five continents to hold the title of Relais & Châteaux Grand Chef. Recently, Bradley was recognized by The New York Times Style Magazine as one of the 28 creative geniuses who defined culture in 2016; while Esquire featured Addison as one of the best tasting menus in the country. Bradley’s collaborative work with the resort’s team of sommeliers on Addison’s wine program has also contributed to recognition from Wine Spectator, Forbes.com, Wines & Spirits, Santé and Food & Wine.

Before his position at Addison, Bradley was executive chef at the critically acclaimed Vu restaurant at the Hyatt Regency Scottsdale Resort & Spa. During his tenure there, he was named a candidate for the coveted James Beard “Rising Star Chef” award for three consecutive years, as well as being lauded as a “Rising Star Chef for 2006” by the Arizona Republic. Other culinary credits include the award-winning Mary Elaine’s at The Phoenician in Scottsdale, as well as an impactful stint spent working under the tutelage of Chef James Boyce at Azzura Point at Loews Coronado Bay Resort.