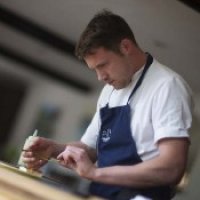 The Black Swan at  Oldstead was created almost a decade ago by The Banks family, who have lived and farmed around Oldstead for centuries.  The dedication shown by the whole team, in this quiet corner of North Yorkshire, has resulted in national acclaim and award-winning cuisine; most recently culminating in placing 28th in the Sunday Times Top 100 Restaurants list.

Since leaving school, Tommy has always been involved in The Black Swan kitchen in some capacity.  His flair and natural ability were evident from a young age.  Keeping close links with the surrounding area, Tommy developed his own unique style in the kitchen.  His commitment to sourcing local ingredients and foraging skills added greater authenticity to the seasonally changing menus and soon gained attention and national recognition.  As a result, at the age of twenty-four, Tommy became the youngest appointed Michelin Star Chef, when the Black Swan retained its star in September 2013 – an accolade he still holds today.

There is a real sense of nature and the seasons at The Black Swan; of fresh tastes straight from the fields and woods; of age-old methods merging with dynamic modern innovation.  Running through everything is a true feeling of purpose.  Tommy and the team are committed to providing diverse and seasonal menus, which emphasises the short journey from field to plate.  To support this endeavour, a two-and-a-half acre kitchen was established in October 2014.  Time is dedicated each day to the cultivation and harvesting of the site, with a number of the kitchen and Front of House team closely involved in its developing story.

The Black Swan is a undoubtedly a ‘family’ affair. The recognition and awards are celebrated amonst the whole team and Tommy leads from the front with purpose and vision.  They can all be rightly proud of their continuing achievements.