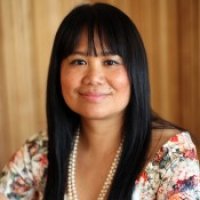 All posts by Saiphin Moore

Inspired to cook at the tender young age of six by her mother, Saiphin embarked on a culinary journey that has transported her from her small hometown, Phetchabun, in northern Thailand to the hustle and bustle of London’s East End.

Saiphin’s career as a chef began over 19 years ago, and has not looked back since. Starting out whilst still at secondary school, Saiphin opened up a grocery store in Phetchabun – her first business venture, which not only served and supported the local community on a daily basis but would, down the line, go on to play a pivotal role in her long term ambition to become a restaurateur.

The grocery store soon created a name for itself and Saiphin was then known by most, if not all, of those living in the area. Due to its success, Saiphin decided to open a small restaurant, cooking and selling a number of homemade favourites to local including noodle broths and rice dishes.

Saiphin soon realised the extent of her passion for cooking. In 2001, she travelled to Hong Kong; it was here that Saiphin met her husband-to-be and also business partner, Alex. In 2006, the couple moved to London, which was when their humble street stall began trading on Brick Lane, offering a takeaway service of home-cooked Thai food. It soon led to the purchase of an archetypal British “caff” in Spitalfields, where Rosa’s Thai Café was officially launched, in June 2008.

Now with three more sites in Soho (2010), Westfield Stratford and on Carnaby Street (2013), the group is steadily growing momentum.

Offering delicious, authentic Thai food against a quirky, relaxed, kitch café-style backdrop, Saiphin’s cooking has continued to pull in the punters and grows from strength to strength.

During her spare time, Saiphin enjoys spending quality time with her family, eating out in new restaurants and researching recipes from across the globe.

Share
When I was young and lived in Thailand, I visited Hong Kong for the first time. There I tried beef in black bean sauce. As soon as l tasted the...