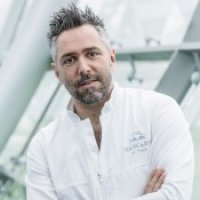 All posts by Roland Trettl

Anyone who has learned their trade under Chef of the Century Eckart Witzigmann can without doubt be described as a master pupil, especially if they develop into such an unconventional top chef as Roland Trettl.

The native of Upper Bolzano, in the South Tyrol province of Italy, has cooked under the patronage of Witzigmann. He was given the task of implementing Witzigmann‘s concept of a luxury resort on Mallorca. The Ca‘s Puers quickly became known as the best restaurant on the island.

When Hangar-7 opened in Salzburg in 2003 and Eckart Witzigmann, patron of Restaurant Ikarus, was seeking the perfect executive chef, one name immediately sprang to mind: Roland Trettl.

What followed is a success story that has enriched – and maybe even changed – the culinary world. Trettl has brought many global culinary stars to Salzburg – from Jean-Georges Vongerichten to Marc Haeberlin – making Restaurant Ikarus and its guest chef concept famous far beyond the borders of Austria.

What‘s more, Trettl has managed to assemble a close-knit and perfectly harmonised team around him. When composing his team, he isn‘t interested in how famous or renowned a name is. Instead, he prefers to recruit talented young chefs for his kitchen.

Share
This is an absolutely amazing scallop tartare dish presented by chef Roland Trettl. If you want to stand out from the crowd or impress someone with a very sophisticated scallop...