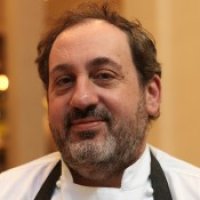 All posts by Peter Conistis

Peter Conistis has wowed Sydney diners and food critics alike with his distinctive modern take on Greek food at his restaurants Cosmos, Eleni’s and Omega. Now at Alpha Restaurant, Peter is spearheading a Greek food empire like Sydney has never seen before.

Peter began his career in his twenties, boldly opening his own restaurant in 1993 after just a brief stint working at a two-hatted restaurant. A 32-seater located in East Sydney, Cosmos afforded Conistis freedom and flexibility and it was here that he began to hone his unique cooking style.

The critics were quick to take note. Within three months the restaurant received a chefs hat in the 1994 Sydney Morning Herald Good Food Guide, becoming the first Greek restaurant to not only be awarded a hat, but also to be mentioned in the guide. The signature dishes at Cosmos included his scallop moussaka and his rabbit pie, two dishes that have gone on to garner acclaim at all of Conistis’ restaurants and are included in the Alpha menu today.

Around this time Peter went on to publish his first cookbook ‘New Greek Cuisine’ with Simon & Schuster. The book gained critical acclaim and in 1995 it was edited and reprinted for the US as ‘Greek Cuisine the New Classics’ with Ten Speed Press.

Conistis closed Cosmos in January of 1997, and in June he opened Eleni’s. There, he further developed his now legendary cooking style, and was rapidly rewarded for it with a further two chefs hats. In 2000, Conistis’ baked nougat tart, orange blossom custard, candied pistachios and Iranian fairy floss dish was declared ‘Dessert of the year’ by Vogue Entertaining and Travel.

Three years later, Conistis was ready to move on. He closed Eleni’s and, in 2004, opened Omega, the restaurant at which he would garner the most attention and prestige to date. In 2005, Omega won Best New Restaurant in the Sydney Morning Herald Good Food Guide. The restaurant was also awarded two chefs hats and Omega’s mezze bar was awarded a further one chefs hat.

Other highlights include Peter’s involvement with “Food Safari” food tours to Greece with Maeve O’meara throughout 2001 – 2006, which lead to Peter working on Greek Food Safari on SBS television in 2005. In 2004 Peter was invited to Athens to cook at the opening ceremony of the Olympic Games, an event that earned him world wide recognition and one he considers to be a highlight of his career.

In 2007 Peter was appointed executive chef at the Civic Hotel where he was again awarded a chefs hat for his take on modern Greek and Mediterranean cuisine.

Now at Alpha Restaurant, Peter showcases his robust understanding and appreciation of Greece’s tantalising regional recipes. His dishes from Alpha’s four menus – quick-fire cantina food, rotisserie menu, a meze menu and an a la carte menu – are testament to Peter’s innovation, yet retain a homely, accessible quality that makes his food so popular.

Guests can expect to see a selection of Peter’s much-loved signature dishes, such as scallop moussaka and rabbit pie – two dishes that have gone on to garner acclaim at all of Conistis’ previous restaurants. Peter will also be introducing a number of new recipes, such as a five-layer pie with saffron and pistachio filo, and a spit-roasted chicken dish with cucumber yogurt.

Share
In a large heavy pan, sauté the onions and garlic in 100gms butter over a low heat for half an hour until soft and lightly golden. Add the sliced beans,...