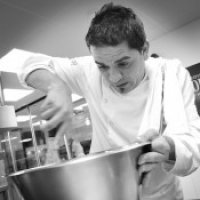 Matteo Ferrantino, originally from Southern Italy, has been in Portugal for eight years, His journey here took him throughout Europe, working in some of the best restaurants and learning from the very best Chefs. Matteo worked in Spain most of the time, but also in Germany, Great Britain and in the unique and outstanding Hangar 7, in Austria, where he worked together with patron Chef Eckart Witzigmann, who was awarded the title of Chef of the Century by Gault Millau. Since 2017 he has owned BIANC, his new restaurant concept. A career which has seen him rise through the ranks to finally create his own culinary venture. Set within the modern surroundings of Am Sandtorpark, on the edge of the Elbe River in the HafenCity quarters of Hamburg, BIANC pays tribute to the chef’s signature contemporary cuisine. His vision translates into unique, colourful dishes, which bring to mind the azure waters and the warm summer evenings of the Mediterranean.

Matteo Ferrantino is currently seen as a rising star of fine cuisine. Not only thanks to having worked alongside big names in the world of gastronomy, starting with Roland .Trettl (Ikarus), Jean-Georges Vongerichten (New York), David Thompson (best Thai food worldwide), Dieter Koschina (Restaurant Vila Joya) and many other renown Chefs, but also and especially due to his talent and his strong culinary ‘vision’.

Speaking of his relationship with Dieter Koschina, he says “We are like bread & butter, we work very well together and compliment each other.”

Matteo’s style of cuisine is modern and innovative, however, he is very much influenced by traditional recipes he has learnt throughout the years and recipes from friends, colleagues and his vast collection of books. Matteo likes to cook fusing quality oils, herbs and fruits. Matteo is a perfectionist that strives for the perfect taste and presentation.

Share
Cooking Time: 70 min
This amazing and sophisticated strawberry cheesecake recipe is brought to you by Chef Matteo Ferrantino.