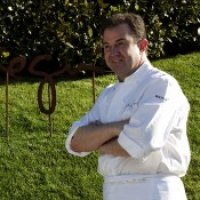 The prestige of Martín Berasategui, the Spanish chef with the most Michelin stars in Spain – eight – took off spectacularly in 1993 when, together with his wife, Oneka Arregui, he opened his restaurant in Lasarte- Oria, 7 km from San Sebastian, at the age of 33.

His training as a chef, and a large part of his life, are connected with Bodegón Alejandro, a charming eatery in San Sebastian’s old quarter, which earned him his first Michelin star in 1986.

“I was born in 1960 at number 4 in the street Calle General Echagüe, between the fishing harbour and the Brecha market”, he explains. “When I was little, I watched the fish arrive in carts pulled by mules from (the districts) Igueldo and Ayete. Eggs, milk, mushrooms and vegetables were sold at the door. My childhood was spent around that market.”

Many personal experiences mingle with adolescent memories, including those of the influential figure of his now deceased father, who ran Bodegón Alejandro at the time. “I was named after him, he was honest and generous, and he believed in teamwork, an idea he managed to instil in me.”

His recollections are so seared in his mind that when he was presented with the San Sebastian “Tambor de Oro” (Golden Drum) in 2005, the award that has meant the most to him, Martín publicly enthused his gratitude, speaking about his mother, his aunt, and heaping endless praise on his father.

Between the ages of 15 and 27, Martín visited France to train and learn. He went without sleep and used his days off time and again to travel to areas in the neighbouring country, sleeping at night on a mattress under the stairs of Bodegón Alejandro.

That’s how he came to steep himself in the secrets of haute patisserie and the science of bread making. In Bayonne, he studied alongside Jean Paul Heinard, and in Anglet with André Mandion. In charcuterie, his knowledge was furthered by François Brouchican in the village of Ustaritz, and in cooking by Bernard Lacarrau in the town of Labatut. However, it was above all with 4 Didier Oudil, an extraordinary professional, the top head chef at the glamorous Les Prés D’Eugénie together with Michel Guerard, that he came into contact with haute cuisine. And then with Alain Ducase, at the restaurant Le Louis XV in Monaco.

Finally, after overcoming many difficulties, on the 1st of May 1993, he opened the doors of his new restaurant in Lasarte, which is called Martín Berasategui. A risky undertaking which, however, catapulted him to fame. Six months after the opening, he regained the Bodegón Alejandro’s Michelin star. Three years later he received the second, and in 2001 he was awarded the maximum classification by the emblematic guide: three stars.

Currently, he manages 15 restaurants in addition to his 3-star Michelin-rated flagship  restaurant, “Restaurante Martin Berasategui”. Among these restaurants are the three starred Lasarte Restaurant at the Monument Hotel in Barcelona and the MB Restaurant located at the Ritz-Carlton Abama in the island of Tenerife, awarded with 2 Michelin stars.

Berasategui’s career has been dotted with awards and recognitions of considerable importance such as the Honorary Doctorate degree conferred by the François Rabelais University of Tours (France) in 2013. Within the last recognitions, in April 2014, he is appointed Gentleman of “L’Ordre des Coteaux de Champagne”. So many, in fact, that listing them would be almost impossible. However, he has been extremely grateful for each one, spreading his passion for and knowledge of cuisine via the various media.

And to cap it all, he has over twenty publications on the market.

Share
Oysters Open the oysters carefully trying not to break them. Place them in a bowl. Strain the water from the shell through a sieve. Wash oysters in the water. Cucumber...