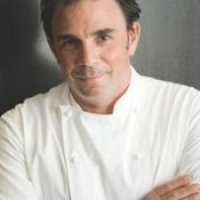 All posts by Josiah Citrin

A culinary expert and veteran of the gourmet dining industry, Josiah Citrin is a Two-Star Michelin Chef and owner of highly-acclaimed Mélisse restaurant in Santa Monica, California, and co-owner of Lemon Moon Café in nearby West Los Angeles.

A Los Angeles native, Citrin discovered his passion for food from his family at an early age. His mother was a caterer and both grandmothers cooked and enjoyed good food. Their knowledge, combined with his passion for cooking and business, led to his desire to pursue a culinary career. Citrin educated himself by moving to Paris after graduating from Santa Monica High School. In the City of Light, he worked for three years at fine Parisian restaurants Vivarois and La Poste, allowing himself to explore his French heritage while gaining understanding of and respect for the rules of traditional French cooking.

This invaluable experience taught him both the art and discipline of cooking and fine dining and formed the definitive basis of his training. He returned to the United States in 1990 with determination and vision and began applying his skills by working at Los Angeles’ finest restaurants- notably Wolfgang Puck’s celebrated Chinois on Main and then at Granita. After two years, Josiah moved on to join Patina and Pinot Bistro and cooked alongside famed chef and restaurateur Joachim Splichal.

At Patina, Josiah met his future wife Diane, who was making their desserts and later became the pastry chef for Chinois on Main. A marriage in culinary heaven was made. Citrin subsequently became Chef at Capri restaurant in Venice and Jackson’s in West Hollywood.

With a heightened interest in French gastronomy and a spirit for entrepreneurship, Citrin launched his first restaurant, JiRaffe in 1996. Located in Santa Monica, JiRaffe specialized in California French Bistro food and was pioneered together with childhood friend and fellow chef Raphael Lunetta. With Diane serving as business manager, JiRaffe quickly developed a loyal following. Citrin’s lifelong dream of opening his own fine dining establishment led to the sale of his interest in JiRaffe to Lunetta. In 1999, with the encouragement, support and assistance of Diane, Mélisse opened its doors to critical acclaim in Santa Monica and has been impressing the culinary world ever since.

Named after the “lemon balm” herb indigenous to the Mediterranean, Mélisse has become a favorite for southern California locals as well as world travelers searching for an exemplary dining experience and an ideal place to celebrate a special occasion. Citrin is present daily in Mélisse’s kitchen and mentors the careers of younger chefs who are hand-selected and trained. He frequents the weekly Farmers’ Market in Santa Monica, where he inspects and procures the produce himself. Having established a long-standing rapport with the various farmers from Los Angeles’ outlying regions, he hosts a bi-annual dinner at his restaurant in their honor. He also participates in many cooking and charitable events each year, including the Wolfgang Puck Cancer Society Event, Planned Parenthood, Special Olympics, Cystic Fibrosis and Cure Autism Now.

In 2004 Citrin partnered with Lunetta again to open Lemon Moon, a casual and New York-style eatery that caters to a loyal crowd with an eclectic palate. Since opening its doors, it has remained a local favorite.

In addition, he has been featured on various television food shows and his restaurant and recipes have been written up in numerous national food publications. Citrin has traveled extensively as a Guest Chef for Crystal Cruises. He has been Guest Chef at: the Four Seasons Singapore; the Rheingau Food & Wine Festival in Germany; the Naples, Florida Wine & Food Festival; Manresa Restaurant in Los Gatos. Citrin was also invited to participate in the “Masters of Food and Wine at the Highlands Inn” in 2001 and 2005, an event that attracts the best chefs from around the world.

Having derived incredible satisfaction from his various business ventures over the past decade and raising two beautiful children with Diane, Citrin looks forward to the next step in his business: bringing his refined skills and artistry to a broader international dining audience. His first cookbook, “In Pursuit of Excellence” was released in autumn 2011; it was awarded the gold medal and named Best Cookbook by the Independent Book Publishers Association and was one of three finalists for a Benjamin Franklin Award. “In Pursuit of Excellence” is available at the Mélisse website (www.melisse.com), on Amazon and at selected retailers.

Share
Bolognese Sauce: Combine the onions, garlic and butter in a pot; sweat the onions on medium heat, season lightly with sea salt. Cook the onions until they are soft and...