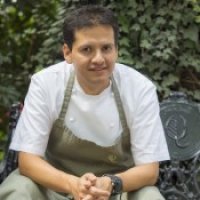 All posts by Jorge Vallejo

Studied Culinary Arts and Administration at the Centro Culinario de México (Ambrosía). In 2004, he set sail with Princess Cruises and worked on voyages around the world. Back on land in Mexico, he joined the team at Pujol and then served as Corporate Chef at Grupo Habita, where he oversaw kitchens at the Hotel Condesa DF, Hotel Habita and Hotel Distrito Capital. In 2010, he became Executive Chef at Restaurante Diana at Mexico City’s St. Regis Hotel, a position he left for a stint at René Redzepi’s famed Copenhagen restaurant, Noma.

Vallejo and his wife Alejandra Flores opened Quintonil restaurant in 2012.

In 2014, alongside Chefs Mauro Colagreco (Mirazur; Menton, France) and Virgilio Martínez (Restaurante Central, Lima), Vallejo launched the initiative known as Orígenes, to re-encounter and preserve culinary products, techniques and customs that survive in small Latin American communities. Since then, the chefs have journeyed to small towns throughout the Americas to research customs and share experiences and teachings with local populations.

In 2016, Chef Jorge Vallejo designed the culinary offer of Hotel Chablé in Yucatan, which he based on organic and seasonal cuisine. In September 2017, Chef Vallejo created a menu for the restaurant Hangar 7, in Salzburg, Austria, which was served throughout that month.

Vallejo has been the recipient of numerous prizes and recognitions. He was named one of the world’s “Rising Stars” (FOUR Magazine, 2014); Chef of the Year (GQ Hombres del Año awards, 2015) and got the Premio Millesime México al Mejor Restaurante in 2015. Quién magazine included him among its list of personalities that are transforming Mexico (2015). In 2016 he was added to the list of Mexico’s 300 most influential leaders.

Share
Cooking Time: 120 min
We are thrilled to feature a new fantastic recipe by Chef Jorge Vallejo, the genius behind Quintonil, one of Mexico’s finest restaurants. Give the roasted eggplant recipe with black garlic...

Like 1
Read More
Comment
Share
Homemade Mole Sauce Toast the tomato, green tomato, tomatillo, onion, garlic, and plantain, including the skins. On the side, toast the spices and the avocado leaves and blend them with...