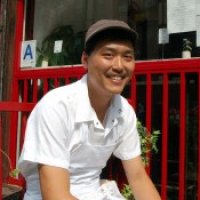 Born in the Bronx and raised in Connecticut, Jonathan Wu grew up with his feet in two worlds – Chinese tradition and suburban America. His family’s pantry was stocked with items culled from both supermarkets and Asian grocery stores, an eclectic mix of ingredients that formed a basis for his uniquely personal cuisine.  After receiving a degree in English from the University of Chicago, Wu moved to New York to take cooking classes at the French Culinary Institute. His nights were spent gaining experience in the city’s kitchens including Blue Hill, Annisa, Vong and Le Bernardin. After stints in France and Spain, he joined the opening team at Geisha, a sister restaurant of Le Bernardin, where he worked directly with Eric Ripert and Michael Vernon. He then became chef de partie at Per Se where he stayed for two years working almost every station in the kitchen. Afterwards, he spent three months at Al Covo in Venice, then worked as a private chef. In 2013, he partnered with Wilson Tang, Jason Wagner and John Matthew Wells to open Fung Tu. In 2015, the restaurant was awarded two stars by The New York Times.