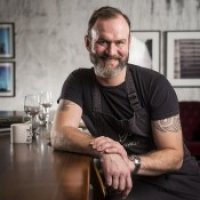 Affectionately known as the Yummy Brummie (coined by Olive Magazine), Glynn Purnell owns and runs Purnell’s in Birmingham. Winning dozens of awards for his inspired and adventurous cooking, Glynn has remained firmly rooted in his home city and won the Birmingham’s first Michelin star in January 2005 as Head Chef at Jessica’s.

Glynn’s first food memory involved baked beans on toast and curry powder! Left in charge of his little brother and sister, he would experiment on them with new combinations and challenged their taste buds. He continues to do this with dishes like poached egg yolk, smoked haddock milk foam and cornflakes on the menu at Purnell’s, cooking which earned him top accolades on BBC’s Great British Menu. Glynn takes old fashioned flavours and brings them up to date with dishes like Royal of Goats Cheese and Pineapple on sticks.

Glynn is the proud owner of three establishments in Birmingham: Purnell’s restaurant opened in 2007 and was awarded a Michelin star in 2009, Ginger’s Bar and Purnell’s Bistro. He started work in kitchens at the age of 14 and spent the following two years at the Metropole Hotel, going every day after school.  They took him on as an apprentice and six years later he won the prestigious Salon Culinaire award.   Glynn moved to Simpson’s which won a Michelin star while he was a Sous Chef and where he also won other personal awards such as the Academie de Culinaire Francaise Annual Award of Excellence in 1996. He went on to work with Claude Bosi at the 2 Michelin-starred Hibiscus in Ludlow before helping to launch Jessica’s back in Birmingham in 2003.

Glynn has taken part in BBC’s The Great British Menu, winning twice and then appearing as a mentor. He has previously featured on The Great British Food Revival, Pies and Puds with Paul Hollywood and with Mary Berry and Michel Roux Jnr on Food and Drink. Glynn is a regular guest chef on Saturday Kitchen with James Martin and recently appeared on BBC 2’s Extra Slice. Glynn’s book Cracking Yolks and Pig Tales was published by Kyle Books in May 2014. In early 2016, Glynn starred as a judge on the Channel 4 series Come Dine Champion of Champions.

Share
Who doesn’t like monkfish?? Really, it’s meaty in a delicate fish form and is used all over; with olives, with bacon, the lot. But it’s big and can hold itself...