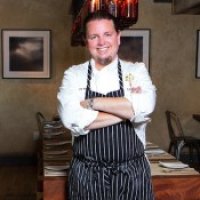 All posts by Charlie Ayers

Chef Charlie lives by the creed “eat, drink, and be merry.” For the past 25 years, he has embodied this ideal as a chef, providing eclectically inspired food and drink in an atmosphere of music and fun.

Chef Charlie grew up in New England, attended culinary school in Providence, RI at Johnson & Wales University, and cooked at several restaurants in the Providence and Boston areas until a desire to travel and experience new flavors led him to California.

Charlie is best known as, “the chef who fed Google.” It was a job he won in a cook-off in 1999, judged by the company’s then 40 employees. By the time he left Google in 2005, his team of five chefs and 150 employees were serving 4,000 lunches and dinners a day at the company’s headquarters in Mountain View, CA.

After six years at Google, Charlie left to open Calafia Café & Market A Go Go in Palo Alto, CA. His concept epitomizes the idea that “being green” is good for the producer, consumer, environment and local community.

A former private chef and (still) personal chef to the Grateful Dead, Charlie continues to consult for startup companies, cater private events and coordinate food service and backstage catering teams at open air music festivals. Charlie has published a cookbook, Food 2.0: Secrets from the Chef that Fed Google, that exemplifies his culinary vision.  In May, 2014 Charlie received an honorary doctorate degree from his alma mater, Johnson & Wales University for his contributions to the culinary arts.

In his free time, Charlie serves on advisory boards for several nonprofits, enjoys relaxing at home, and cooking for friends and family.

Share
Marinade for 6-8 salmone fillets Heat honey w/ fresh juices in microwave, just until honey melts. Place all of the above ingredients in a bar blender, add in honey and...