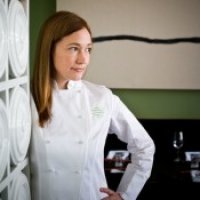 All posts by Andrea Reusing

Chef Andrea Reusing collaborates with small farms in her marriage of North Carolina ingredients and Asian flavors at her Chapel Hill, NC restaurant, Lantern. Since opening in 2002 it has been named one of “America’s Top 50 Restaurants” and “best farm-to-table restaurants” by Gourmet, as one of “America’s 50 Most Amazing Wine Experiences” by Food & Wine and as “Restaurant of the Year” in 2009 by The News & Observer.

Reusing is the 2011 winner of the James Beard award for Best Chef: Southeast. She serves on the boards of the Center of Environmental Farming Systems, Chefs Collaborative and was recently appointed by Governor Beverly Perdue to the Sustainable Local Food Advisory Council. Reusing’s first book, Cooking in the Moment: A Year of Seasonal Recipes, was named one of 2011’s most notable cookbooks by the New York Times.

Share
Fill a deep, heavy pot with a lid about one-third full with oil, and heat it until a deep-fat thermometer reads 375°F. In the meantime, combine the rice flour, salt,...